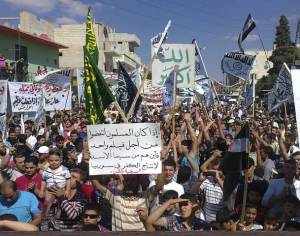 Russia has said that it is imperative for Iran to join a proposed peace conference on Syria despite reservations from some Western nations.

“The issue of Iran is key for us,” said Sergei Lavrov, Russia’s foreign minister, while on a visit to Paris on Tuesday. “Iran, without question, is one of the most important nations.”

Russia has argued that both Iran, a key backer of Syrian President Bashar al-Assad, and rebel ally Saudi Arabia should take part in the negotiations as part of a new push for peace agreed by Moscow and Washington earlier this month.

France has already rejected the idea of Iran taking part, while the United States has responded to Moscow’s proposal with scepticism.

On Monday, Lavrov said that he and US Secretary of State John Kerry had agreed in Paris that more “clarity” was needed about who could take part in the proposed negotiations before a date for them could be set.

“We must get clarity about the participants,” said Lavrov. “And this concerns not only the Syrians that will represent the various levels of society, but also the foreign players.”

Russia and Iran are seen as Assad’s most important allies and key suppliers of weapons used by the regime’s forces.

Diplomats have said that details of how the conference would be organised had yet to be agreed, and there was still no firm agreement on the date.

The possibility of an arms race in Syria overshadows attempts to bring representatives of the Assad regime and Syria’s political opposition to peace talks.

The talks, though seen as a long shot, constitute the international community’s only plan for ending the conflict that began more than two years ago and has killed more than 70,000 people.

Syria’s fractured opposition, which has not yet committed to the Geneva talks, could also be lured to the table if attendance is linked to receiving weapons in the event that talks fail.

Opposition leaders have said they will only participate in talks if Assad’s departure from power tops the agenda, a demand Assad and his Russian backers have rejected. [AlJazeera]