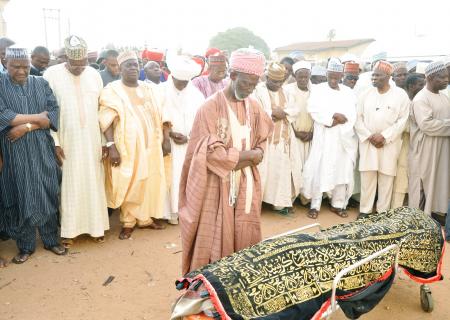 President Goodluck Jonathan Thursday described as a national loss the death of the former Federal Capital Territory (FCT) Minister, Maj.-Gen. Mamman Tsoho Kontagora, who was until his demise the Deputy Chairman of the Subsidy Reinvestment and Empowerment Programme (SURE-P).

In a statement signed by the President’s Special Adviser on Media and Publicity, Dr. Rueben Abati, Jonathan, on behalf of himself, the Federal Government and all Nigerians, extended sincere condolences to the late minister’s family, the Kontagora Emirate Council, Governor Babangida Aliyu and the people of Niger State.

He added: “The President joins them in mourning the illustrious and indefatigable former Minister of Works and the FCT who, even in retirement, continued to serve his fatherland with zeal, vigour and enthusiasm whenever he was called upon to do so.

“President Jonathan believes that the nation will always honour the memory of the late army engineer for having served Nigeria with commendable patriotism and distinction during an excellent career in the Armed Forces and in various other capacities in the public service, including as minister, Sole Administrator of the Ahmadu Bello University, Zaria, and Chairman of the Presidential Committee on the Development of National Stadia for the World Youth Soccer Championship in 1995.

“He prayed God Almighty to grant his soul eternal rest.”

Also on the delegation was the Minister of State for Power, Mrs. Zainab Ibrahim Kuchi, and the Chairman of Sure-P, Dr. Christopher Kolade.