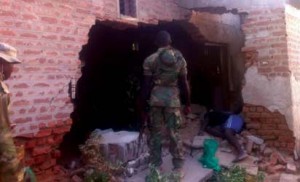 The killings came on the heels of the 55 killed by Boko Haram in the border town of Bama Tuesday and the 187 civilians reportedly killed by soldiers in Baga mid April.

Speaking to State House correspondents in Abuja after a closed-door meeting with Vice President Namadi Sambo at the Presidential Villa, Abuja to brief the vice president on the security situation in his state and other sundry issues, Suswan said, “You must have heard that there are serious altercation between the Fulanis and the local farmers. This time it happened in Agatu Local Government, which is one of the local governments the Senate President represents; they almost overran the local government.

“There was a lot of killings, a lot of property destroyed and I felt that I should come to brief the Vice President, who is holding forte for the President. I also discussed other sundry issues relating to the general security situation in the country,’’ Suswan said.

He confirmed the arrest of 10 of the mercenaries, who perpetrated the mayhem, by a joint task force of the Police, Army and SSS.

“We have arrested 10 of them with heavy weapons and many rounds of ammunitions and they are with the police now.

“The casualty is high, I don’t want to be misquoted as per the numbers, but it is high casualties.The Fulanis normally come when people are sleeping; so they killed both women and children and everybody,” the governor said.

Suswam’s counterpart from Nasarawa State, Gov. Umaru Al-Makura, had earlier met with the Vice President to brief him on the security situation in his state.

Al-Makura confirmed the killing of 20 policemen on Tuesday by a cult group known as the “Ombatse” militia group at Assakio village, about 10 kms from Lafia, the state capital. Ombatse, an Eggon word, means the time has come.

Reacting to both incidents, Suswam said they should be treated as a national issue with a decisive action taken by the security agencies.

He decried a situation where issues of security were politicised while security personnel were been killed with impunity.

“Where people kill uniform people with impunity is totally unacceptable and when there is a situation like that and the security agencies react and people say they are excessive it is not right.

“You know there must be some fears instilled in people. The way we are going, if people can look at uniform people and go out and ambush them and kill them in the manner it was done, I don’t think that that should be acceptable to anybody. I do not support people who say that security people are excessive at times in the action they take because they must make sure that such a thing must not repeat itself.

“I just want to solicit the support of every Nigerian; this is not an issue that should be politicised and put on partisan table as some people are doing. This is an issue that must be addressed collectively. When U.S. was attacked both the Republicans and the Democrats joined hands together knowing that it was a problem of the nation,’’ he said.

The governor said governors of the affected states had been pro-active by engaging the people and ensuring that the security situation did not degenerate.