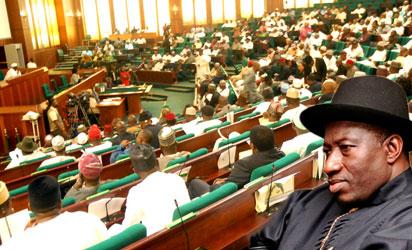 Barring any last minute hurdles, the House of Representatives will begin debate on a proposed law to strip the President of the power to grant state pardon to individuals.

The piece of legislation which seeks to bar the President from granting pardon to public office holders convicted for corruption, may be the House’s response to the controversy that greeted the state pardon granted former Governor of Bayelsa State, Diepreye Alamieyeseigha, who was convicted for graft.

The bill, Information Nigeria learnt, which is sponsored by Hon. Emmanuel Jime (PDPBenue), is entitled: “A Bill for an Act to Amend Section 175 of the 1999 Constitution of the Federal Republic of Nigeria to subject the Presidential Powers of Pardon to the approval of the National Assembly.”

The bill, which has a short title of “Constitution of the Federal Republic of Nigeria, 1999 (Amendment) Bill, 2013,” seeks to subject the decision of the President to pardon any felon to the approval of the National Assembly.

The proposal goes thus: “Section 175(2) of the Principal Act is hereby amended to read as follows; (2) The powers of the President under sub-section (1) of this section shall be exercised by him after consultation with the Council of State and approved by a majority of each House of the National Assembly.

“Section 175 of the Principal Act is further amended by inserting a new sub-section (4) to that section to read as follows: (4) Notwithstanding the provisions of sub-section (1) above, the President shall not have the power to pardon a convict whose sentence was for an economic or financial offence.”

The Principal Act (constitution) presently states in Section 175(1a) that: “The President may grant any person concerned with or convicted of any offence created by an Act of the National Assembly a pardon, either free or subject to lawful conditions.”