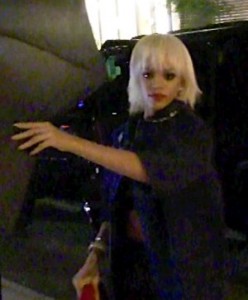 Getting over a breakup is never easy, but a good way to get a fresh new outlook on life is to rock a completely new look. Rihanna appeared to be doing just that as she stepped out on the town in New York on Monday.

The 25-year-old singer was spotted sporting a short platinum blonde bob following her recent breakup from on-again, off-again flame Chris Brown. She looked stylish and confident, but the sun-kissed look may only be temporary. The bob was reportedly a wig that she had worn earlier in the day while shooting a commercial for MAC Cosmetics, according to the Daily Mail.

(Splash News)RiRi’s bodyguards did their best to give the singer some privacy as she made her way through the Big Apple by shielding her with umbrellas, but photographers quickly caught a glimpse of her new style, which also included a long denim coat, black leather pants, and a bright red clutch.

The busy star had also been shooting another campaign for U.K. clothing brand River Island earlier that day, tweeting, “2 day shoot for my upcoming Autumn/Winter collections with River Island was flawless! My models looked so damn good! Foreign chicks errwhere.”

Meanwhile, Brown was on the opposite coast filming a tribute video for Aaliyah on a rooftop in Compton. The singer was recently spotted stepping out with his ex-girlfriend, Karrueche Tran, following his split from Rihanna last week.

This couldn’t have been easy for Rihanna–but seems as if she’s coping by throwing herself into her work and some very fashionable new looks.