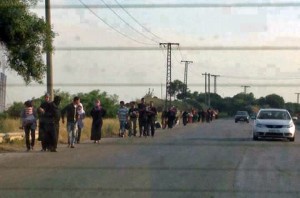 The activists on Saturday said the killings in the Ras al-Nabaa district of Banias took place two days after state forces and pro-Assad militias massacred at least 62 Sunnis in the nearby village of Baida.

“I estimate that hundreds of families left and headed for nearby towns like Jableh and Tartous,” Rami Abdelrahman, head of the British-based Syrian Observatory, said.

“But now the army is turning people back at the checkpoints outside the town, telling them to go back to Banias, that nothing is wrong. There are also announcements going out on mosque loud speakers telling people to return home.”

Ahrar al-Sham, a self-proclaimed Islamist opposition armed group, published a video on Saturday of its fighters launching rockets they said were aimed at the village of Qurdaha, the birthplace of Assad’s father, Hafez al-Assad, who ruled Syria for more than 30 years.

They said the attack was a response for the killings in Baida and Banias.

The Syrian Observatory, a pro-opposition monitoring group, posted online a video showing the bodies of 10 people it said were killed in Ras al-Nabaa – half of them children.

Some were lying in pools of blood, and one toddler was covered in burns, her clothes singed and her legs charred.

Another video posted online by activists showed what they said were the bodies of 20 people killed in Banias overnight, all from the same family, including women and nine children.

The two-year-old uprising against four decades of Assad family rule has been led by Syria’s Sunni Muslim majority, and sectarian clashes and alleged massacres have become increasingly common in a conflict that has killed more than 70,000 people.

Alawites, a sub-sect within Shia Islam, have largely stood behind Assad, who is also from the same sect.

Banias, the target of the recent attack, is a Sunni pocket in the midst of a large Alawite enclave on Syria’s Mediterranean coast, and activists in the area accuse militias loyal to Assad of ethnic cleansing.

The Observatory blamed the killings on the National Defence Forces (NDF), a new paramilitary group made up mostly of fighters from minorities that back Assad.

Trained and often directed by the military, the NDF describes itself as a reserve force for the army. The group has taken over the regionalised role of more informal armed Assad loyalists known as shabbiha, which were accused of previous massacres of Sunnis.