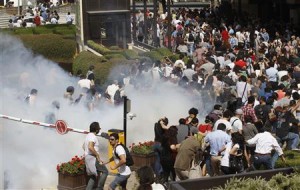 It took riot police in Istanbul tear gas and water cannon to rout a peaceful demonstration by hundreds of people staging a sit-in to prevent the demolition of what many are calling the city’s last green public space.

The demonstrators occupied the Gezi park since May 28 to prevent bulldozers from completing the demolition, part of the government’s redevelopment plan for central Taksim Square.

Several protesters were injured on Friday when a wall they climbed collapsed during a police chase, and a prominent journalist was hospitalised after being hit in the head by a tear gas canister, the private Dogan news agency reported.

Police moved in to disperse the crowd on the fourth day of the protest against a government plan to revamp the square. Officers then clashed with angry demonstrators in surrounding areas.

The protesters are demanding that the square’s park, be protected.

Many also aired grievances against Prime Minister Recep Tayyip Erdogan’s Islamic-rooted government which has been displaying increasingly authoritarian and uncompromising tendencies in its third successive term in office.

Last week, the government enacted a law restricting the sale and advertising of alcohol which has alarmed secular Turks who fear an encroachment on more liberal lifestyles.

Earlier this week, the government went ahead with a ground-breaking ceremony for the construction of a disputed third bridge across the Bosporus Strait which some say will destroy the few remaining green areas of the city.

It also named the bridge after a controversial Ottoman sultan believed to have ordered a massacre of a minority Shia Muslim group, instead of choosing a more unifying figure.

Protesters in Gezi Park were seen holding up a large poster with a caricature depicting Erdogan as an Ottoman sultan with a caption that read: “The people won’t yield to you.”

Erdogan dismissed the protesters’ demands for the park’s protection, saying the government would go ahead with renovation plans “no matter what they do”.

The forestry minister said more trees would be planted than those uprooted at Gezi and has defended the government’s environmental record.

The dawn raid was the latest in a series of aggressive crackdown on protests. Human rights activists frequently accuse Turkish police of using inordinate force to break up protests and of excessively using tear gas and pepper spray against protesters.