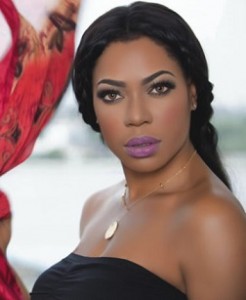 Why do you have so much tattoos?

I have about four tattoos and they represent different things. I have some in some undisclosed places but the ones you can see, you can see. I have on my hand, which represents my daughter; she is my angel. The one on my leg is my Leo star sign. The other ones, let’s forget about them.

Can you tattoo something about your spouse on your body?

No, I wouldn’t do that. Why would I put the face of my boyfriend on my body? What if he leaves me tomorrow? You know how guys are really. So I can’t just have a guy’s face on my body and tomorrow he goes away. What will happen?

What is it like for you, being a mother?

I really love my daughter. I love her so much, she is going to be 10 this year. She doesn’t live in Nigeria, she only comes on holiday. Being a mother is the best thing that has happened to me. It has made me really calm and focused, knowing that I have to work towards something; at the end of the day, build an empire for my daughter, my children, the ones that are going to come after her. I’ve not had pains though, just been happy.

Do you not miss her?

How about her dad and you? What happened?

Who was the first guy you kissed?

That would be my daddy. Apart from my dad, it would be my first boyfriend. We met in school, he wasn’t in the same school with me. It was more like love at first sight, when you have a crush on somebody. You know how this puppy love thing is, that’s it, asides my dad. I was quite young and I was not in Lagos, I was in Paris.

How close are you to your dad?

I’m a daddy’s girl. My daddy is the man I love most. If I meet someone like him again, I’ll get married to him. I’m the last child and you know what they say about last kids, especially last daughters and daddies. I really love him and he really loves me. It’s so cool. Growing up was fun with him. He loved driving fast and we were always singing speed racer for him. That is the craziest thing I can remember. I drive like a boy sometimes if I choose to.

Why did you choose to go into fashion designing?

I have always had this fashion thing in me. I have always had this fashion thing going on since I discovered clothes and colours. My mother said I used to choose my clothes when I was young. When I was a child, I always chose my clothes. I never studied it in school, I would just add two and two together and they came out nice. When I discovered it was my passion, I felt I could translate it into something good.

When did you go professional with it?

I had my first launch on December 29, 2009. That was when I discovered Vonne Couture. There, I showed basically everything I would go into in the future. I displayed jackets, casual wears, denims; I just used everything I knew I was going to go into. The fabrics I love, I just put all of them together to make dresses, shorts, and it was just crazy in a beautiful way. Everything I had in my head I just put them together and that was my first launch and it went very well.

How would you describe your brand?

Can you remember the first dress you made?

Yes I can. I made it for myself. I was going for a wedding and I made something, a reversible dress. After it was done, I was surprised because I did not know it was going to come out that way. When people saw it, they were like wow and I rocked the dress well. That was in 2008.

You seem to have travelled a lot as a kid. Why?

My mother used to work with Air France and a Cameroonian airline. She is Cameroonian. She worked for a couple of airlines so I was always not around. I was not born here, I came to stay here in Lagos for a little while. Then, I went back to London for school.

Why did you decide to come to Nigeria?

This is my fatherland. I have my family here. That was why I came to Nigeria.

How lucrative is your business?

It is a two-way thing. It pays if you are doing the ready to wear outfits which I don’t really go into. Sometimes, I do that if I see something someone likes and it is wearable. If I want to make my outfits, that is when I go the couture line. Couture are things you create with your head, they are not everyday dresses. You get money off ready made dresses; for the couture you don’t get money. This business you don’t really get money off it because you are spending a lot at the end of the day. Lagos is not that advanced, we are not yet that opened. We are still learning, we are still backwards in the whole fashion thing.

What was your experience making clothes for Annie Macaulay-Idibia’s bridesmaids?

It was great, everything went well. That was my second bridal work; my second wedding. The first was for a friend. That was when I knew I could go into it. That one went well, no stress, nothing as it was in Lagos. This one, we had it in Dubai. Most of the bridesmaids hadn’t come for their fittings, but everything went smoothly at the end of the day. I had to fly to Dubai to get the girls fitted for the last time, it was just crazy. I didn’t make the bride’s dress. I don’t listen to rumours, I just let everything go because I know I did not make the dress.

What is your worst fear?

I hate being in a dark room. I hate the dark. I sleep with the lights on. I put the lights on, either that or the television is on. It’ll have no sound but it will just be on and I can see movement.

Are you in a relationship?

Did you ever date Ice Prince?

Why did you not debunk the rumours?

Me? You think I have time for Lagos? You think I want to go out there and talk? I don’t have time. I have better things to do, I’ll not go on Twitter and say it’s a lie. Say whatever you want to say, it is my life. I don’t do that.

How did you feel when you heard the rumours, didn’t you feel bad?

What do you look out for in a man?

His eyes and his lips.