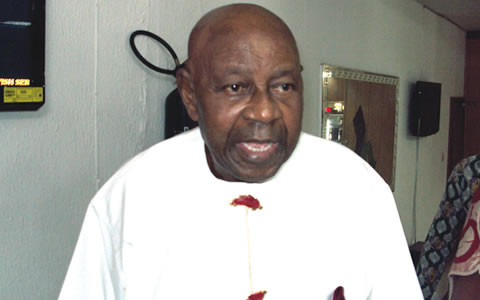 Former Petroleum Minister, Prof. Tam David-West, says the only reason Governor Rotimi Amaechi of Rivers State is being harrassed by some political forces is his refusal to be anybody’s ‘Yes man’.

Prof. David-West, speaking on a radio programme in Port Harcourt, also asked President Goodluck Jonathan to be wary of the Ijaw leader, Chief Edwin Clark and leader of the Niger Delta People’s Volunteer Force (NDPVF), Alhaji Mujaheed Dokubo-Asari. He said neither of them had the powers to make him win the 2015 election.

David-West showered encomiums on General Muhammadu Buhari, who he said stood tall when compared to President Jonathan in terms of achievement as Nigeria’s leader.

According to the former minister, Amaechi has had to fight alleged injustice of ceding oil wells belonging to Rivers State in the Kalabari axis to President Jonathan’s Bayelsa State.

This, he said has not gone down well with some people.

He added: “I am not a politician. No amount of money in the world can make me to change my mind. I support causes, not persons. What has Amaechi done wrong? He has not done anything wrong. Professional praise singers are making millions of naira through the crisis.

“Those who said Amaechi has received N2.4 trillion since he became Rivers governor, without commensurate projects on the ground, are talking rubbish. The Kalabari people fighting Amaechi are not serious. They are not more Kalabari than me. Amaechi has not disappointed Kalabari people.”

“It is completely illogical to say Jonathan must be re-elected in 2015, because he is a South South man. Jonathan is not a South South President, but the President of Nigeria.

“Clark, Dokubo-Asari and others cannot save Jonathan in 2015. In an interview in a national newspaper on June 15, 2012, Dokubo-Asari declared that Jonathan would not go beyond 2015 as President. Why is he speaking from both sides of his mouth?

“You cannot compare one hundred Jonathans to one Buhari. I will always give my support to Buhari. He is the finest man I have ever known. Negative things that they say about him are not factual. I will continue to work for Buhari.

“Corruption is the bane of Nigeria. Buhari is against corruption. Buhari is not corrupt. He is very clean and disciplined. Election rigging is worse than armed robbery. Buhari wants free, fair and credible elections in Nigeria.”