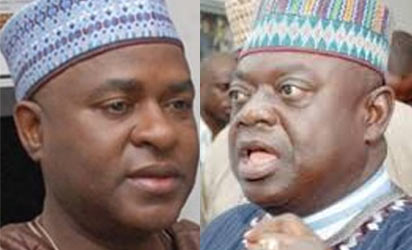 Bauchi State Governor, Malam Isa Yuguda, on Thursday in Abuja put the crisis rocking the Nigeria Governors Forum (NGF) at the doorstep of the Northern States’ Governors Forum and its leadership.

Addressing State House correspondents after a meeting with President Goodluck Jonathan at the Presidential Villa, Mr. Yuguda challenged the chairman of the NSGF and Niger State Governor, Dr Mu’azu Babangida Aliyu to tell Nigerians the truth about the decision to make Plateau State Governor – Da Jonah Jang, the consensus candidate for the NGF election.

“The blame for all the crises and all the unfortunate comments made about the governors today should be traced to the Northern States’ Governors Forum (NSGF) because we the members are the culprits.

“That is why I say, on his honour, let the Chairman of the NSGF come out and tell Nigerians the truth.

“So, if that has been done all these things that we have seen wouldn’t have happened,” he said.

The governor said he refused to attend a meeting held yesterday in Kaduna by the NSGF because he felt he could not seat among people who could not keep to their words.

“That is why I now say, as far as I am concerned, that if I will sit with my colleagues and we will take a decision and some people will then go and do a different thing, I will not be part of those kind of things.

“I, as a person, will not attend such a meeting again. But my Deputy Governor can attend on behalf of the people and government of Bauchi state. But, as a person, I will not. That has always been my position,” he said.

Speaking further on his credentials and integrity among people in leadership positions, Yuguda asserted, “There must be integrity in governance, because we the governors should be people of integrity. We should be role models and we should not play evil politics as far as I am concerned, because most people associate politics to evil.

“But I am not carved out for that. I am a professional chartered banker. I was the Managing Director of two banks and I served this country as cabinet minister twice and governor twice.

“My word should be my bond, and if I sat down with 18 of my colleagues and we have agreed on something, I should not see the chairman of that forum reneging on the integrity of the NSGF and by extension the NGF,” he said.