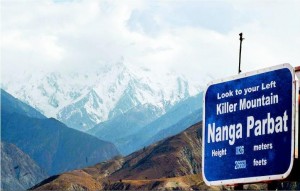 Nine foreign tourists and one Pakistani were on Sunday shot to death before dawn, by militants wearing police uniforms, as they were visiting one of the world’s highest mountains in a remote area of northern Pakistan, officials said.

The foreigners who were killed included five Ukrainians, three Chinese and one Russian, said Pakistani Interior Minister Chaudhry Nisar Ali Khan. One Chinese tourist was wounded in the attack and was rescued, he said.

The local branch of the Taliban took responsibility for the killings, saying it was to avenge the death of a leader killed in a drone strike.

The shooting is likely to damage the country’s struggling tourism industry. Pakistan’s mountainous north – considered until now relatively safe – is one of the main attractions in a country beset with insurgency and other political instability.

The attack took place at the base camp of Nanga Parbat, the ninth highest mountain in the world at 8,126 metres.

Nanga Parbat is notoriously difficult to climb and is known as the “killer mountain” because of numerous mountaineering deaths in the past.

It’s unclear if the tourists were planning to climb the mountain or were just visiting the base camp, which is located in the Gilgit-Baltistan region of Pakistan.

The gunmen were wearing uniforms used by the Gilgit Scouts, a paramilitary police force that patrols the area, said the interior minister.

The attackers abducted two local guides to find their way to the remote base camp. One of the guides was killed in the shooting, and the other has been detained and is being questioned, said Khan.

“The government will take all measures to ensure the safety of foreign tourists,” said the interior minister in a speech in the National Assembly, which passed a resolution condemning the incident.

Pakistani Taliban spokesman Ahsanullah Ahsan claimed responsibility for the attack, saying their Jundul Hafsa group carried out the shooting as retaliation for the death of the Taliban’s deputy leader, Waliur Rehman, in a US drone attack on May 29.

“By killing foreigners, we wanted to give a message to the world to play their role in bringing an end to the drone attacks,” Ahsan told The Associated Press by telephone from an undisclosed location.

The attackers beat up the Pakistanis who were accompanying the tourists, took their money and tied them up, said a senior local government official.

They checked the identities of the Pakistanis and shot to death one of them, possibly because he was a minority Shiite Muslim, said the official, speaking on condition of anonymity because he was not authorised to talk to the media.

Although Gilgit-Baltistan is a relatively peaceful area, it has experienced attacks by radical Sunni Muslims on Shiites in recent years.

The attackers took the money and passports from the foreigners and then gunned them down, said the official. It’s unclear how the Chinese tourist who was rescued managed to avoid being killed.

Local police chief Barkat Ali said they first learned of the attack when one of the local guides called the police station around 1am on Sunday.

The Pakistani government condemned the shooting in a statement sent to reporters.

“The government of Pakistan expresses its deep sense of shock and grief on this brutal act of terrorism, and extends its sympathy to the families of the victims,” said a statement issued by the Foreign Ministry. “Those who have committed this heinous crime seem to be attempting to disrupt the growing relations of Pakistan with China and other friendly countries.”

Pakistan has very close ties with neighbouring China and is very sensitive to an issue that could harm the relationship. Pakistani officials have reached out to representatives from China and Ukraine to convey their sympathies, the Foreign Ministry said.

Many foreign tourists stay away from Pakistan because of the perceived danger of visiting a country that is home to a large number of Islamic militant groups, such as the Taliban and Al Qaeda, which mostly reside in the northwest near the Afghan border.

However, a relatively small number of intrepid foreigners visit Gilgit-Baltistan during the summer to marvel at the peaks of the Himalayan and Karakoram ranges, including K2, the second highest mountain in the world.

Syed Mehdi Shah, the chief minister of Gilgit-Baltistan, condemned the attack and expressed fear that it would seriously damage the region’s tourism industry.

“A lot of tourists come to this area in the summer, and our local people work to earn money from these people,” said Shah. “This will not only affect our area, but will adversely affect all of Pakistan.”

Shah said authorities are still trying to get more information about exactly what happened to the tourists. The area where the attack occurred, Bunar Nala, is only accessible by foot or on horseback, and communications can be difficult, said Shah. Bunar Nala is on one of three routes to reach Nanga Parbat, he said.

The area has been cordoned off by police and paramilitary soldiers, and a military helicopter is searching the area, said Shah. The military plans to airlift the bodies of the foreign tourists to Islamabad, he said.

The government suspended the top police chief in Gilgit-Baltistan following the attack and has ordered an inquiry into the incident, said Khan, the interior minister.