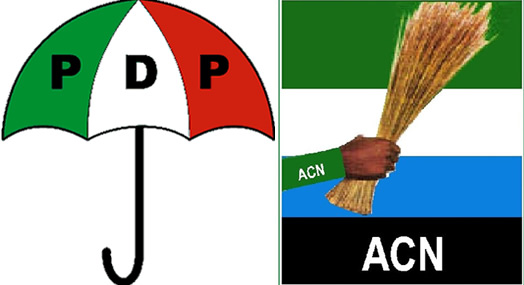 The Peoples Democratic Party, PDP, has lampooned the opposition, Action Congress of Nigeria, ACN and Congress for Progressive Change, CPC, for asking President Goodluck Jonathan to probe reports that his security details prevented Rivers State Governor, Chibuike Rotimi Amaechi from personally exchanging pleasantries with him at the mid-term report dinner which held last Wednesday at the Presidential villa.

The PDP took the ACN national leader, Bola Tinubu to the cleaners describing him as a despot in reference to the alleged imposition of his daughter, Folashade Tinubu-Ojo, as President-General of the Association of Nigerian Market Women and Men, when she is not a full-time trader.

In a statement on Sunday by the PDP Acting National Publicity Secretary, Tony Okeke, the party described the demand by the ACN as “irresponsible meddlesomeness and foolish scandal-mongering” saying the ACN and its “co-traveller”, the CPC, are merely embittered by the reconciliations in the PDP and are as such crying wolf where there is none.

Noting that such protocol issues are understood by all, the PDP said the ACN and CPC have overtime showed that they are quarrelsome parties which derive pleasure in causing disaffection among Nigerians.

“The ACN and the CPC are merely embittered by the reconciliations so far achieved in the PDP and seek to use all means to undermine it. That is why they are crying wolf where there is none. Protocol issues are understood all over the world. Therefore the demand by the ACN smacks of irresponsible meddlesomeness and foolish scandal-mongering aimed at causing disaffection among our leaders and party members,” the PDP said in the statement.

The PDP said Mr. Jonathan has a good relationship with all state governors including the Rivers State governor.

Turning its focus to Asiwaju Tinubu, the PDP said the ACN leader, “who parades himself as a democrat” has clearly shown his despotic tendencies with the installation of his daughter as the leader of traders without recourse to democratic processes.

“Nigerians have clearly seen that the so-called democrats and self-styled messiahs in the ACN are indeed wolves in sheep’s skins. The ACN leader, Asiwaju Bola Tinubu who has been parading himself as a democrat has once again shown his despotic tendencies with the installation of his daughter, Mrs. Folashade Tinubu-Ojo, who is not a full-time trader to succeed his mother late Alhaja Abibat Mogaji, as President-General of the Association of Nigerian Market Women and Men in utter disregard to democratic principles.

“This shows the level of disdain the ACN and its leaders have for democracy. It shows the type of leadership that is obtainable within the ACN where members have been gagged just as it indicates what form of leadership Nigerians should expect if such leaders are allowed to hold power at any level in the country”.

“We challenge the ACN which always harps on democratic principles to examine this issue and come out with its verdict. We also call on Lagos Sate Governor, Babatunde Fashola to listen to the people and ensure that the right thing is done by allowing the traders to choose their leader through a democratic means”, the PDP said.