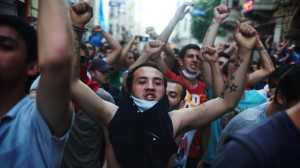 Turkish Interior Minister Muammer Guler said on Tuesday that 62 people had been detained in Istanbul, Turkey’s biggest city, while 23 others had been arrested in the capital Ankara as a result of raids in several cities.

“The operations are against members of the Marxist-Leninist Communist Party, who also attended the Gezi Park protests, as part of an investigation being conducted by prosecutors for more than a year,” Guler added.

Earlier, police detained a dozen people who stood still at Istanbul’s Taksim Square in a form of passive defiance against Prime Minister Recep Tayyip Erdogan’s authority after activists were ousted from a sit-in at Gezi Park over the weekend.

Erdogan defended the police crackdown and use of pepper spray against the protesters on Tuesday after earlier use of tear gas and water cannons against peaceful protesters were widely condemned.

“Using pepper stray is natural right of the police. Have they fired a bullet, have they used guns?…The police forces have passed the democracy test,” Erdogan said in an address to his Justice and Development Party’s (AKP) parliamentary group at the assembly.

Accusing Erdogan of behaving a like a dictator, Kilicdaroglu said that Turkey’s reputation had increased as a result of “youth’s cry for freedom”.

The Human Rights Watch (HRW) has stated that it documented “a huge wave of arbitrary detentions and police attacks” during the Gezi Park protests in Istanbul over the weekend.

In a statement published on its website on Tuesday, HRW said Erdogan government’s use of force in a clampdown on protesters has “precipitated a deepening human rights and political crisis in Turkey”.