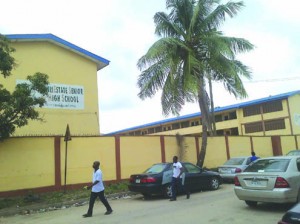 The victim, a SS1 student identified as Abigail Chidinma Enyenwa, passed out after she was allegedly whipped by the teacher for insubordination.

Sebastine was subsequently arrested at the school premises the following day by policemen from Iponri Police Station for interrogation over the matter.

It was gathered that Abigail incurred the wrath of her teacher when she allegedly behaved rudely and acted contrary to his instructions during a class session on the fateful day.

The Chemistry teacher was said to have asked all students whose parents were not present during the school’s open-day to stand on their feet, an instruction which Abigail allegedly ignored. She reportedly disregarded, the teacher’s instruction and sat down while others stood up.

The teacher who was infuriated called her out, and gave her some strokes of the cane for her action.

It was reliably gathered from our source that Abigail passed-out in the process and commotion ensued afterwards.

She regained consciousness minutes later when some packs of sachet water were poured on her by her classmates and her frightened teacher who initially thought she was pretending.

The matter was said to have been reported at Iponri Police Station by the girl’s parents while Sebastine was arrested the following day.

The school Principal, Mrs Anyah however prevented the police from taking the teacher away when they arrived at the school to effect his arrest.

When P.M NEWS visited the school on Wednesday and Thursday, to get the teacher’s side of the story, he was not available for comments on the two occasions.

The school principal was also said to have gone for a meeting outside the school premises when PM News went to the school on Wednesday, and the reporter was referred to the Vice Principal who denied knowledge of the incident.

The principal who was around for comments the following day denied that the incident happened in the school. “Well, as a civil servant, am not obliged to speak to the media. Besides, I don’t understand what you are talking about. No teacher beats a student to stupor here,” Mrs. Anyah said.

A student who does not want his name mentioned and who claimed to be Abigail’s friend, said, “I’m not in her class and wasn’t in school when it happened. But I heard the story. I asked her and she told me what happened.

“She said she stood up when the teacher asked them to do so but was putting her hands around her waist. She told me that she did not answer him when he asked why she’s not standing properly and the teacher in anger descended on her,” he said.

Another student who is Abigail’s classmate and was in class when the incident happened, said: “she behaved rudely to the teacher. She was behaving as if Mr Sebastine was her boyfriend while he was talking to her. He only gave her four strokes of the cane and she passed out.

“Initially he thought she was pretending but when she didn’t stand up, he became frightened and asked us to go and buy some packs of pure water which we poured on her. I guess she wasn’t feeling alright that day or something was wrong with her.

“Mr Sebastine cannot beat somebody to stupor. He’s not that wicked. Besides, we do receive more than six strokes of the cane from him and we never fainted for once,” he said.

When asked if it was true that the teacher has been suspended, he said:”he was in school on Wednesday before the police came to arrest him. They came with an arrest warrant but the principal prevented them from taking him away.

“I have not seen him afterwards but I guess he’s among the teachers who are currently undergoing training. I think that was why he was not in school today(Thursday),” he said. [PM News]