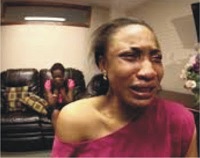 The National Drug Law Enforcement Agency, NDLEA has reacted to the photos of Indian Hemp posted by Nollywood actress, Tonto Dikeh, on the social media, boasting that “I smoke ganja”.
Disclosing that Tonto Dikeh may spend the next 15 years in prison for daring to smoke Igbo and expose it, the NDLEA spokesman, Mitchell Ofoyeju said:

“Our attention has been drawn to the post quite frankly and I can tell you that action will be taken on it. The law is clear and NDLEA has been very clear on the issue. No one is permitted to sell, use, cultivate or encourage the use of Indian hemp in Nigeria. The weed is one of the banned narcotics in the country.”

To had on Friday posted photographs of a wrap of hemp and grains of the weed formed into the letters, ‘Happy birthday POKO.’

She also posted a photograph of herself and added the inscription, ‘Mi smoke ganja mi smoke weed…’ Her picture was also close-up of her face that seemed to depict her in a high state.

Mr. Mitchell Ofoyeju further stated that Tonto Dike’s case have already been referred to the appropriate department of the agency for investigation and prosecution.

“NDLEA Act Section 14 (b) states that any person who conspires with, aids, abets, counsels, attempts to commit or is an accessory to any act or offence referred to in this act shall be guilty of an offence under this act and liable on conviction to be sentenced to imprisonment for a term not less than 15 years and not exceeding 25 years,” he said.

Possibly reacting to the criticism she has attracted to herself, Tonto Dike wrote on Instagram:

“no 1 kwz my struggle, al they see is Tonto diz, Tonto dat!!!! nt kwin hw hard it hurt deep down to loose ur mom at d age of 3, n it hurt d most nt to hav her enjoy d fruit of her child birth, Mom i missed u alot #POKO”