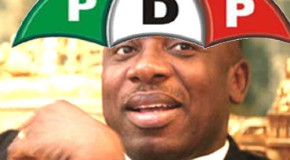 The opposition Action Congress of Nigeria (ACN) has accused the ruling Peoples Democratic Party (PDP) of refusing to heed the warnings by Nigerians against overheating the polity and setting the country on fire just to satisfy one man’s personal ambition to hold on to power.

Speaking through its National Publicity Secretary, Alhaji Lai Mohammed in a statement issued in Lagos on Sunday, the ACN said it was left with no choice than to reach that conclusion after a faction of the Rivers State PDP reportedly loyal to President Goodluck Jonathan expelled the state Governor, Mr. Rotimi Amaechi, at a time all people of goodwill were calling for an amicable resolution of the lingering crisis in the state.

It warned that the overzealous ruling party’s sole concern is power without caring about the responsibility that goes with it; hence the party’s thirst for power must be checked through all constitutional means before it plunges the country into unmitigated chaos.

ACN in apparent reference to concerns by the PDP in what interests it has in its internal affairs said in as much as it is not bothered by the internal wrangling of the ruling party, its (ACN’s) concerns stem from the dangerous impact that the Rivers crisis can have on the polity, especially the country’s fledgling democracy, to which most of the rabble-rousers in the ongoing crisis contributed nothing.

”Because of the danger their actions pose for our polity, we are concerned that these trouble-makers are hell bent on annihilating Gov. Amaechi. Those who have accused us of crying more than the bereaved do not get it. We are indeed the bereaved once anything happens that can torpedo our democracy and destroy our country. This is why we will also be unrelenting in calling on all Nigerians to call the puppets and puppeteers in Rivers to order.

”Needless to say, in the words of the Nobel Laureate Wole Soyinka: The man dies in all who keep silent in the face of tyranny,” the party said.

It further alleged that Gov. Amaechi’s current travails in the hands of his all-powerful enemies, who have used national institutions – including the police – against him, are not unconnected with his stout defence of the Nigeria Governors’ Forum (NGF), which he chairs; His battle for his state and its people over their oil well dispute with the president’s home state of Bayelsa, which is in accordance with his oath of office and constitutional responsibility, as well as his audacity in rejecting dictations from an unelected self-important personality (a veiled reference to the First Lady) on how he governs his state.

”It is no longer news that Gov. Amaechi, as the Chair of the NGF, exercised his mandate with dignity by fighting for true federalism, especially as it relates to the Sovereign Wealth Fund (SWF). In the process, he ruffled some feathers. But those who are irked by his efforts should have known better than to stake the credibility of their high office on stopping, at all costs, Amaechi’s re-election.

”They also forget that state Governors are elected just like the President, that they are not subordinate to anyone and that nowhere in the constitution is it said that Governors must report to the President or agree with everything he proposes

”As for the allegation that the Rivers Governor failed to heed the instructions from high (though unelected) quarters that he MUST halt the demolition in Okrika, we leave Nigerians to judge whether somebody occupying a post that is unknown to the constitution can override one who is a creation of the constitution….regarding that person’s constitutional mandate. We leave it for Nigerians to determine whether a state Governor, who is the Chief Security Officer of his state, should have no say over the security of the state, just because an overbearing ‘political’ Police Commissioner has assumed extra-powers at the behest of his puppeteers!” ACN said.

The ACN again appealed to all people of goodwill not to keep silent while naked power is unleashed in Rivers state, warning that if the crisis spirals out of control, the entire country will be the victim.

”For us, this is not about politics. It is about the rule of law and the survival of our nation,” it said.