Since the last academic session, each new student of the Lagos State University, Ojo, has been paying between N240,000 and N345,000 per session. The tuition payable depends on a student’s course of study. Before the new fee regime, rate was N25,000 per student. 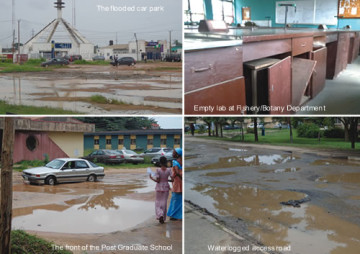 By Segun Olugbile and Sodiq Oyeleke

But in spite of this new tuition, which many will consider  huge, compared to what  obtains in other public higher institutions, the state of physical and academic facilities is way far off what is  expected in a university.

For one, a visitor to the institution will be welcome by floodwater-filled potholes on the less than two kilometres road that runs through the heart of the citadel. It is the only major road on the main campus of the 30-year-old institution. This makes driving through the campus hectic.

As many members of the academic community agree, the environment is everything but beautiful. Whenever it rains, car parks and some faculties, including the Faculty of Education and the Postgraduate School, would become water-logged. Some lecture rooms are dilapidated, while some laboratories, especially the one in the Botany and Fishery Department, are empty. Only some slab-like tables, chalkboards and ceiling fans in the room give you the impression that you are in a lab.

Investigations also reveal that LASU’s Internet facility has stopped working since about five months ago, a situation that has forced lecturers to rely on their own modems to browse the web for research purposes. Some lecturers add that the Internet facility was even so slow while it worked that they had to depend on their modems.

The new fee regime also seems to be dealing a death blow on the institution, as many candidates are no longer seeking admission to LASU. For instance, as at July 19, only about 1,100 candidates had registered for the post-Unified Tertiary Matriculation Examination of the university. This is despite the fact that the admission quota given to LASU by the National Universities Commission for the 2013/2014 academic session is about 5,000.

But if the students are afraid, their lecturers are not. Rather, many of them are angry. In fact, the lecturers are now at daggers-drawn with management over the state of affairs in the university, particularly their unmet demands. The Chairman, Academic Staff Union of Universities in LASU, Dr. Adekunle Idris, who articulated the grouse of the lecturers against the university, says if something urgent is not done about the union’s requests,  the institution should prepare for a long closure, even after the resolution of the ongoing national strike called by the national leadership of ASUU. The university and the Lagos State Government, Idris says, should use the opportunity of the ongoing strike to resolve all the issues raised by the local chapter.

“Otherwise, LASU lecturers will start a local version of the action and we will not call it off until they listen to us and meet our demands,” Idris says.

So, what are the issues? Idris says they are many. These, he notes, include unpaid salary arrears; unpaid earned allowance; planned programme rationalisation and its attendant job loss; inadequate physical and academic facilities; non-implementation of agreement, especially on retirement age for lecturers on professorial cadre; non-implementation of single-term tenure for principal officers; and planned deduction of tax in arrears.