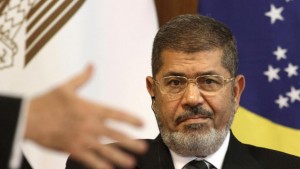 Egypt’s Muslim Brotherhood have called for a wave of protests furious over the military’s ouster of its president and arrest of its revered leader and other top figures, underlining the touchy issue of what role the fundamentalist Islamist movement might play in the new regime.

There are concerns of Islamist violence in retaliation for Mohammed Morsi’s ouster, and some former militant extremists have vowed to fight.

Suspected Islamic militants opened fire at four sites in northern Sinai, targeting two military checkpoints, a police station and el-Arish airport, where military aircraft are stationed, security officials said. The military and security responded to the attacks, and one soldier was killed and three were wounded, according to security officials who spoke on condition of anonymity because they were not authorised to speak to reporters.

The question of the role of the Brotherhood has long been at the heart of democracy efforts in Egypt. President Hosni Mubarak, ousted in 2011, and previous authoritarian regimes banned the group. After Mubarak’s fall, the newly legalised group vaulted to power in elections, and its veteran member Morsi become the country’s first freely elected president.

Now the group is reeling under a huge backlash from a public that says the Brotherhood and its Islamist allies abused their electoral mandate. The military forced Morsi out Wednesday after millions of Egyptians turned out in four days of protests.

Adly Mansour, the head of the Supreme Constitutional Court, with which Morsi had repeated confrontations, was sworn in as interim president.

In his inaugural speech, broadcast nationwide, he said the anti-Morsi protests that began June 30 had “corrected the path of the glorious revolution of January 25,” referring to the 2011 uprising that toppled Mubarak.

The Brotherhood charged the military staged a coup against democracy and said it would not work with the new leadership. It and harder-line Islamist allies called for a wave of protests Friday, naming it the Friday of Rage, vowing to escalate if the military does not back down.

Brotherhood officials urged their followers to keep their protests peaceful. Thousands of Morsi supporters remained massed in front of a Cairo mosque where they have camped for days, with line of military armoured vehicles across the road keeping watch.

The Brotherhood denounced the crackdown, including the shutdown Wednesday night of its television channel, Misr25, its newspaper and three pro-Morsi Islamist TV stations. The military, it said, is returning Egypt to the practices of “the dark, repressive, dictatorial and corrupt ages.”

A military statement late Thursday appeared to signal a wider wave of arrests was not in the offing. A spokesman, Colonel Ahmed Mohammed Ali, said in a Facebook posting that the army and security forces will not take “any exceptional or arbitrary measures” against any political group.

The constitution, which Islamists drafted and Morsi praised as the greatest in the world, has been suspended. Also, Abdel-Meguid Mahmoud, the Mubarak-era top prosecutor whom Morsi removed to much controversy, was reinstated to his post and immediately announced investigations against Brotherhood officials.

Many of the Brotherhood’s opponents want them prosecuted for what they say were crimes committed during Morsi’s rule, just as Mubarak was prosecuted for protester deaths during the 2011 uprising. In the past year, dozens were killed in clashes with Brotherhood supporters and with security forces.

The swift moves raise perceptions of a revenge campaign against the Brotherhood.

The National Salvation Front, the top opposition political group during Morsi’s presidency and a key member of the coalition that worked with the military in his removal, criticised the moves, saying, “We totally reject excluding any party, particularly political Islamic groups.”

The Front has proposed one of its top leaders, Mohammed ElBaradei, to become prime minister of the interim Cabinet, a post that will hold strong powers since Mansour’s presidency post is considered symbolic. ElBaradei, a Nobel Peace laureate who once headed the UN nuclear watchdog agency, is considered Egypt’s top reform advocate.

“Reconciliation is the name of the game, including the Muslim Brotherhood. We need to be inclusive,” Munir Fakhry Abdel-Nour, a leading member of the group, told The Associated Press. “The detentions are a mistake.”

Morsi has been under detention in an unknown location since Wednesday night, and at least a dozen of his top aides and advisers have been under what is described as “house arrest,” though their locations are also unknown.

Besides the Brotherhood’s top leader, General Guide Mohammed Badie, security officials have also arrested his predecessor, Mahdi Akef, and one of his two deputies, Rashad Bayoumi, as well as Saad el-Katatni, head of the Brotherhood’s Freedom and Justice Party, and ultraconservative Salafi figure Hazem Abu Ismail, who has a considerable street following.

Authorities have also issued a wanted list for more than 200 Brotherhood members and leaders of other Islamist groups. Among them is Khairat el-Shater, another deputy of the general guide who is widely considered the most powerful figure in the Brotherhood.