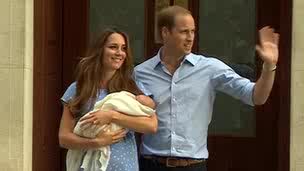 The world today caught the first glimpse at Britain’s royal baby as the Duchess of Cambridge stepped out of St. Mary hospital clutching her baby.

“He’s got a good pair of lungs on him that’s for sure. We’re still working on a name for him,” Prince William says as he emerges from the hospital.

The world yesterday welcomed the much anticipated Britain’s royal baby who has been regarded by Wikipedia as world’s most popular baby.

Bookmakers have made money on everything related to the baby; its sex, date of birth, hair colour, kind of cloths he will wear, etc.

The royal baby’s arrival was announced yesterday and it turned out ‘it’s a boy!’

Kate Middleton, Duchess of Cambridge was said to have laboured for 10 hours before been delivered of the healthy baby who is third in line to the British throne. Prince Williams was with Kate throughout labour, and witnessed the birth of his first son, a future king.

As much as William and Kate will want their baby to have a normal life, being in public eye is something he’d have to live with like his parents.

The baby has not been named yet, but his title has been announced as Prince of Cambridge.