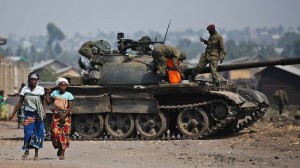 Fresh fighting has erupted in eastern Congo, after more than 100 armed men disguised in women’s clothing entered the country from Rwanda.

The heavy fighting between the Congo army and M23 rebels resumed on Monday morning after starting on Sunday following the arrival of the armed men in women’s clothes, local inhabitants say.

“They were wearing kikwembe” – a Congolese shawl worn by women – “over their uniforms, and women’s headscarves,” said Bifumbu Ruhira, a farmer at the village of Kanyarucinya on the front line between the Congolese army and the M23 rebels, who started fighting the government last year.

Ruhira told the Associated Press he saw the oddly dressed combatants get off two trucks on the Rwandan side and run across the border. “They were wearing kikwembe to confuse us, to conceal the fact they were soldiers,” he said.

“The whole village was afraid and I said to my wife, ‘Get to Goma,'” he said, naming the nearby provincial capital which he thought she would be safe from the fighting.

Another resident, Bakari Murefu, confirmed the account and said the fighting broke out at 2pm on Sunday, shortly after the armed men crossed the border and reinforced the M23 rebel ranks located some three kilometres from Kanyarucinya.

A report published last month by the United Nations panel of experts studying Congo alleges that Rwandan soldiers have joined the M23 in recent months, a claim that Rwanda adamantly denies.

Last year, the UN experts alleged that entire units from the Rwandan army had travelled to Congo to reinforce the M23 in battle. Though Rwanda has consistently denied supporting M23, the allegations have been deemed plausible by numerous donor countries, which have cut off aid to Rwanda over the accusations.

Both sides blamed each other for the renewed fighting on Sunday, which continued until dusk, and then resumed Monday morning.

It is not clear which side has the upper hand in the fighting. Small arms, mortar and rocket fire was moving west, suggesting the M23 was making progress. But the heavier fire appeared to be coming from the Congolese army, which was reinforced with tanks.

Morale seemed high on the army side, where Colonel Jacky Zeng told the AP: “The M23 are attacking us again so as to be noticed. They are worried that people have forgotten about them.”

There has also been renewed fighting further north on Congo’s border with Uganda, where an Islamist Ugandan rebel group has occupied several villages near the town of Beni. More than 60,000 civilians have fled from the area to Uganda, according to the UN refugee agency.