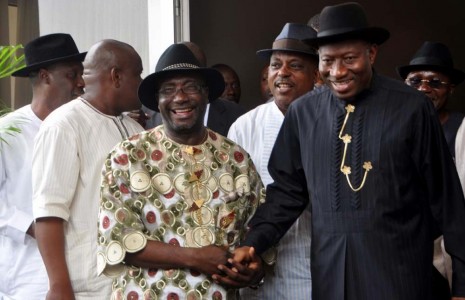 The leadership of the People’s Democratic Party, PDP, in Rivers State has accused Governor Rotimi Amaechi of already working with the All Progressives Congress, APC, just as it supported his suspension from the party.

The party leaders, led by the state party chairman, Felix Obuah, stated this after a meeting with President Goodluck Jonathan at the Presidential Villa on Thursday.

The Obuah-led leadership, opposed to Mr. Amaechi, is purportedly being sponsored by the Minister of State for Education, Nyesom Wike, and the presidency.

Briefing newsmen on the outcome of their meeting, Mr. Obuah said, “We are pained and our heart bleeds today that the main champion of opposition in the country against Mr. President and indeed the Federal Government of Nigeria is our own son, Governor Rotimi Chibuike Amaechi.

“This is indeed shameful. We do not know what has come over the young man. Is it that he wants to destabilize the PDP before his eventual movement to his new party, having been handed over the ACN/APC structure in Rivers State?

“Unfortunately, he has repeatedly rebuffed every effort by us and well meaning Nigerians to make him show remorse and respect for the office of the President of the Federal Republic of Nigeria. Mr. President Sir, we sincerely apologize to you and the First Lady on this sad situation,” he added.

Mr. Obuah claimed Governor Amaechi was on his own as residents of Rivers State were not in support of his row with the president.

“We appeal that as the saying goes, ‘you do not visit the sin of the father on the son’ and implore your Excellency to remember us in prayers.

“To demonstrate that Rivers people are not with Governor Amaechi in this hostile attitude against Mr. President and our great party, we shall continue to support his suspension from the PDP by the National Working Committee until he retraces his steps from engaging in anti-party activities,” he said.

The party chairman said Mr. Amaechi was not only disrespecting the office of the president but is also attacking the Nigeria Police; stating that his bone of contention with the new Commissioner of Police in the State, Joseph Mbu, was because the new police chief refused to do his bidding like his predecessors did.

The party chairman hailed Mr. Mbu as ‘God-sent’ because he has refused to be used to “arrest and harass political opponents of Governor Amaechi and charging them to court on trumped-up charges.”

“It is for this reason that our Governor has been doing everything including instigating commission of crimes to ridicule and blackmail the Commissioner of Police.

“Governor Amaechi desperately wants Mr. Mbu out of Rivers State and has publicly threatened to lead a street protest in Port Harcourt with hired persons and non Nigerians. The idea of the protest we understand, is to further press for the removal of the patriotic and selfless Commissioner of Police in Rivers State,” he said.

Describing Wike as a source of inspiration, the party chairman commended the Minister “as well as many others in our struggle to restore our dignity and forge ahead as a winning party.”

He pledged the party’s support for Mr. Jonathan, his transformation agenda as well as his polices adding that he can go to sleep with his two eyes closed “believing that at all times, we will massively support and stand with you, come rain come shine”.

Mr. Obuah said he gave the President assurances that there was no crisis in the party and that “whoever that is not disciplined and who is not in support of our programme should be left out.”

“At every point in time, we let people realize that the party is supreme and the President is the leader of the party and we have come to show our commitment at loyalty to him”.