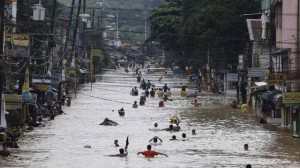 An estimated 600,000 people in the Philippines remained at temporary shelters or with relatives on Friday after days of heavy rain that killed 20, officials said.

A day after floods ebbed in the capital Manila, stagnant pools of water and high tides in coastal areas prolonged the misery in the central Luzon plains to the north, civil defence official Josefina Timoteo told AFP.

“These are mainly farmers and fisher folk who still cannot return to their homes or resume work. We are still supplying their needs,” said Timoteo, the civil defence chief for the region.

“These are low-lying regions and this happens every year. It is a way of life for many of them and the local governments are well-organised to provide relief.”

Seasonal monsoons dumped more than a month’s rain in Manila and surrounding provinces between Sunday and Wednesday, the state weather service said, submerging about half the capital in floodwaters.

The rains were worsened by Tropical Storm Trami, which hit China on Thursday after hovering off the northern Philippines earlier in the week.

The government’s National Disaster Risk Reduction and Management Council said 200,000 people were still in government-run shelters Friday, with 400,000 others staying with friends or relatives and likewise receiving food rations and other emergency aid.

The council raised the death toll to 20 as receding floodwaters led to the discovery of two bodies in Cavite province, south of Manila.

Most of those who have yet to return home are from the central Luzon region, where 481 villages remain under floodwaters up to a metre (3.3 feet) deep, Timoteo said.

The weather is improving but the evacuation centres, mostly schoolbuildings, are expected to start emptying only next week, she added.

As a result, classes are still suspended in those areas, she said.

The health department has stocked up medicines at evacuation camps to prevent the spread of epidemics, she said, adding there had been no reports of widespread diseases.

The floods wreaked 97.3 billion pesos’ ($2.2 billion) worth of damage to infrastructure and crops, the government says.

The Philippines endures about 20 major storms or typhoons annually, generally in the second half of the year and many of them deadly. [AFP]