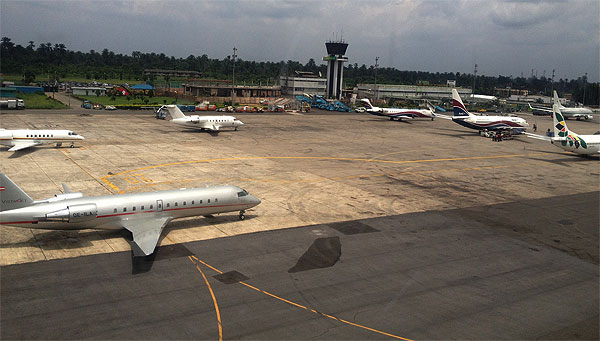 Good times are certainly here for the South East geo-political zone as the Akanu Ibiam International Airport, Enugu, three days to the commencement of official international commercial flights to and from the region, witnessed its maiden international flight yesterday.

The aircraft which landed at the recently refurbished airport at about 3.20pm is the first international flight to touch down at the airport after it was upgraded to international status by President Goodluck Jonathan two years ago.

The president also did the groundbreaking ceremony for the international wing early this year.

Though work on the project is still at various stages of construction, the Federal Ministry of Aviation gave approval for the official commencement of international flights from Enugu for Saturday with the Ethiopian Airline billed to ply that route for a start.

Speaking with journalists after the four-hour flight to Enugu from Senegal, Prince Eze hailed President Jonathan for fulfilling his promise to the Igbos, stressing that the upgrade of the airport would boost the economy of the South East.

“Look at me; I flew from Senegal to Enugu for four hours non-stop. I don’t need to go to Lagos or Abuja to catch direct flight again to Europe or Senegal. I can now go from my house to any place of choice. It is a good thing and I thank God for the development. The people of the South East will live to enjoy this because it will grow our economy,” he said.