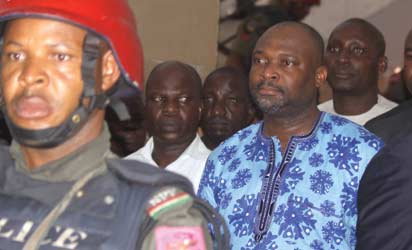 Chidi Lloyd, the embattled Majority Leader of the Rivers State House of Assembly, has been granted bail by a Rivers High Court sitting in Ahoada.

Mr. Lloyd, who represents Emohua constituency in the Assembly, turned himself in at the Force Headquarters in Abuja, following the crisis that rocked the Assembly on July 9 and July 10.

He was declared wanted for alleged attempted murder by the police.

He was however arraigned before a Port Harcourt high court on July 31 while the case was adjourned to Aug. 6 for hearing.

The presiding judge, Charles Wali, granted the detained legislator bail following an exparte motion filed by the legislator’s counsel, praying the Court to grant him bail on health grounds.

Ruling on the exparte motion, Mr. Wali ordered that a motion on notice be served to the Rivers State Police Command and Force Headquarters in Abuja.

The court will deliver judgment on the damages on August 14.