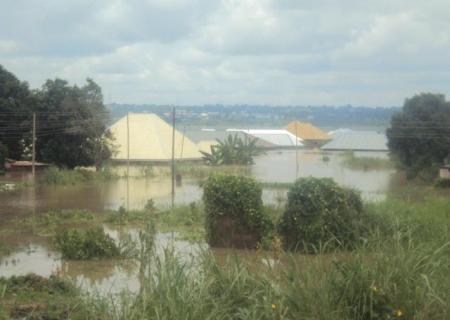 Flood on Friday destroyed crops worth millions of Naira following the collapse of Kankia dam in Kankia Local Government Area of Katsina State.

The News Agency of Nigeria (NAN) reports that rice and maize farms had been washed away following the collapse of the dam.

Some of the victims told NAN that the situation could affect irrigation farming, which could further lead to food security problem, unemployment and rural-urban drift.

Malam Abba Almu, a farmer, said the incident, which was the first of its kind in the history of the town, had destroyed crops worth millions of Naira.

Almu urged the state and federal governments to come to their aid as many of them would not have food for their families.

He also called for the immediate re-erection of the collapsed dam’s embankment.

Another victim, Abdulkadir Mai’unguwa, said the disaster would negatively affect the over 500 irrigation farmers in the area who relied on the dam for irrigation activities.

Mai’unguwa also said that herdsmen had to move to nearby local governments following the collapse of the dam.

He urged the state government to assist them and reconstruct the embankment for the socioeconomic development of the area.

The Chairman, Caretaker Committee of the council, Alhaji Abubakar Lawal, lamented that the dam was recently rehabilitated by the Federal Government.

He said it was rehabilitated under the constituency project of the member representing the area, Alhaji Ahmed Babba, “but yet, it collapsed.”

He appealed to the lawmaker, to as a matter of urgency, call the contractor back to site to reconstruct the embankment and widen the water spillway to avert future occurrence. (NAN)