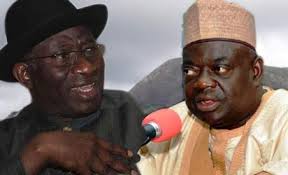 Gov. Babangida Aliyu of Niger said on Thursday that he was not against the person and administration of President Goodluck Jonathan.

Aliyu made this remark in an interview with State House correspondents shortly after a closed-door meeting with Jonathan at the Presidential Villa, Abuja.

The governor said he was in the villa to consult with the President on issues concerning his State and the PDP convention coming up in Abuja on Saturday.

“Nigerians put him there and God put him there. This is the mistake that people make. They want to put people against each other.

“Even in your house, as a father, sometimes your child may disagree with the way and manner to do certain things.

“But that does not mean he is not your son. I think that is the misnomer that many people have been giving out.

Aliyu stressed that the President was not involved in the crisis that engulfed the Nigeria Governors’ Forum.

He frowned at a situation where the public always liked to involve the office of the President in any controversy in the country.

“You remember our problems in the Governors Forum; we are discussing how to resolve them.

“We want to clearly insulate Mr President out of it because they always say the President is involved in any issue that happens.

“Even the simple election that took place for the Youth Council in Niger  State, many people wanted to bring politics into it.

“I have heard people saying it should not be held in Niger because the governor is against the President.

“I think that is a misnomer and a local approach to the matter’’, he said.

The governor also denied the recent media report that he was leaving the PDP to float a new political Party – Voice of the People – with some of his colleagues.

“I am not a quitter, God took me to PDP. My prayer was to be the Head of Service of the Federation and God said I should be governor under PDP.

“I am not about quitting now unless I am dismissed and I am not jumping from one party to another”, he said.

Aliyu noted that with the reconciliation achieved in the last National Executive Council meeting of the PDP, the national convention of the party on Saturday would be hitch-free. (NAN)