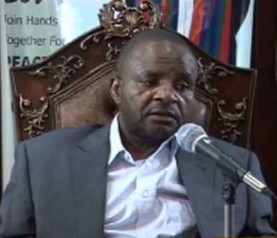 The President of the Nigeria Labour Congress (NLC), Abdulwaheed Omar has warned against people playing politics with the health of Gov. Danbaba Suntai of Taraba.

Omar gave warning in an interview with the News Agency of Nigeria (NAN) in Abuja on Friday and added that those involved in the controversy in the state act within the law in the interest of the people.

He advised that no one should stage manage the governor’s ability to govern the state, saying if the governor was not incapacitated, he should be allowed to function.

“I think we should stop playing politics with the Taraba State issue and even if we should play politics, we should make sure we don’t contravene the provisions of the constitution.

“It is provided in the constitution that in the case where a governor is not capable, the deputy will fill the gap pending when the governor recovers.

“But in the case of Taraba, it is clear that some people are stage managing the return of the governor and some of the things we are hearing are very funny,” he said.

Omar said if the governor was fit as claimed by his supporters, he should follow due process after returning to the country.

“For a governor who returned from medical treatment abroad, one expects that the first function the governor should have carried out is to address the people of the state.

“But the first thing we are seeing is  sacking people, dissolving the cabinet and doing all sorts of things.

“I think this leaves a lot of questions to be answered. The House of Assembly which should be working hand in hand with the executive claimed they were barred from seeing the governor.

“The governor remains the governor unless he decides to resigns or he dies or there are clear indications that he is incapacitated, then, a formal decision will be taken.

Omar called on all stakeholders to desist from actions that would put the state in jeopardy. (NAN)