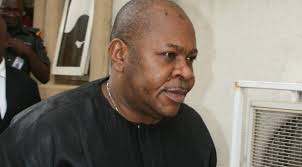 Mr. Ajudua, who had been battling a kidney-related ailment, was “rushed” to LUTH from the clinic at Kirikiri Maximum Prisons where he had been remanded, Allens Agbaka, his lawyer said.

“He has been a serious kidney patient and has been living on one kidney for a long time,” Mr. Agbaka said.

“What happened was that the kidney started to malfunction, he did not pass sufficient urine for a while and so the prison doctor attempted to pass a pipe through his manhood,” Mr. Agbaka said.

“In the course of doing that, he started to bleed and he had to be rushed to LUTH at exactly 2 p.m. on August 3,” he added.

When contacted, LUTH declined to confirm his admission at the hospital.

“It is not to my knowledge, I’m not in the hospital right now,” said Hope Nwawolo, LUTH’s Spokesperson.

Also, the EFCC refused to state if they were aware of the development.

Wilson Uwujaren, the commission’s Spokesperson, said that Mr. Ajudua was “not in EFCC custody.”

“We are talking about somebody who said that he is ill. He is not with us here,” Mr. Uwujaren said.

Mr. Ajudua was first arraigned in 2003 before a Lagos High Court in Ikeja.

In 2005, after he had been granted bail to seek medical attention in India over his kidney-related ailment, Mr. Ajudua absconded, according to the EFCC.

The trial of the duo resumed in June after Mr. Ajudua “voluntarily decided” to attend trial proceedings.

This time, Olubunmi Oyewole, the trial judge, refused to grant him bail despite claims of ill health.

His plea to be granted leave to be treated as an outpatient at LUTH was also turned down by the judge.

The trial was, however, discontinued after Mr. Ajudua filed a petition seeking to transfer the case to another judge.

Mr. Agbaka said that there was no latest development since the trial was brought to a temporary end.

“For now, we have not taken any further step. He must be alive to face the trial. For now, we are battling with his health,” Mr. Agbaka added.