The remains of Alhaji Ademola Fashola, the father of the Governor of Lagos State, were this afternoon laid to rest at the Vaults and Gardens Cemetery, Ikoyi, Lagos, southwest Nigeria amidst torrents of tributes. 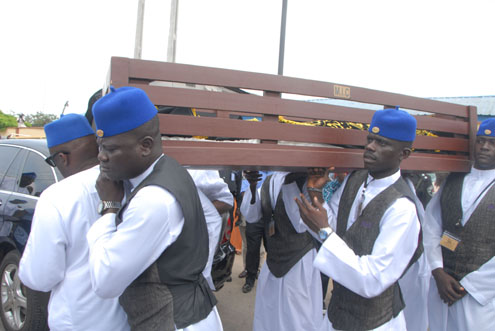 The remains of Pa Fashola arriving at his Surulere home, Lagos this morning for the lying in state

Fashola died on Monday at the age of 80 after a protracted illness. Prayers were offered for the repose of his soul at the Lagos Central Mosque, Lagos Island before he was taken to the Vaults and Gardens for burial.

Earlier in the day, the remains of Pa Fashola laid in state at his residence at Ladipo Labinjo Street, Surulere where sympathisers paid their last respects.

His body arrived at his residence from the mortuary in black Merceses Benz SUV at about 11:55am while a lying in state was later held in his honour at Surulere Senior Secondary School.

At the grave side, the Muslim clerics offered prayers for Pa Fashola’s repose and prayed God to grant him eternal rest before he was lowered to the grave in the presence of the governor, Babatunde Fashola and other siblings.

The burial was also witnessed by prominent Nigerians who came to pay their last respects to the deceased. Torrents of tributes from Nigerians have continued to pour in for the late Pa Fashola.

In his tribute, constitutional lawyer, Prof. Itse Sagay, Afenifere Renewal Group, ARG, and several Nigerians joined others in mouring the deceased. Sagay described the news of Fashola’s father’s death as devastating and commiserated with Governor Babatunde Fashola over the loss.

According to him, “the death of Fashola’s father is emotionally devastating. It is shocking. People will say he died as an old man, but to the immediate family, no one is ever old, they still want him around. I will personally write to the governor to commiserate with him.” 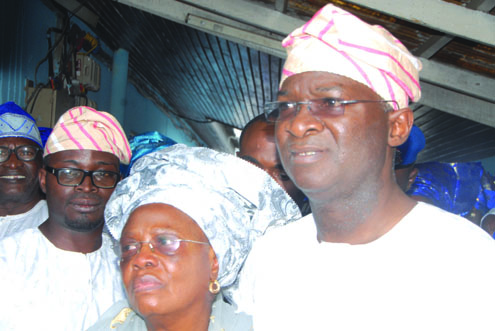 Gov. Fashola, his mother, Omolara, and his brother at the lying in state

Sir Victor Olaiya, a high life maestro and childhood friend of the late Pa Ademola Fashola, on Monday said he would miss the deceased a lot. Olaiya, who was among the early callers at the residence of the deceased, told newsmen that he was humorous and loved to make people happy.

“I will miss his jokes and his smile. We were together many years ago when he was at Daily Times. He was nice, humble and kind and it would be difficult not to miss somebody like that,” the music legend said.

Lagos State Deputy Governor, Adejoke Orelope-Adefulire has expressed her shock and sadness over the death of Pa Fashola, noting that the state would have loved to have more of him around. In a statement signed by the Special Assistant to the Deputy Governor on Media, Tunde Abatan, she noted that the late Alhaji Fashola was a great supporter and adviser of the government, who was never afraid to express his opinion on all policies of government.

“Papa was always available to offer his advice on all issues relating to the governance and the welfare of the people of Lagos State. He was always frank in his discussion and telling us what he feels we are not doing right or what the people expect from us,” Adefulire was quoted to have said. Adefulire prayed to the Almighty Allah to grant him a place in Al-Jannah.

She also prayed to God to comfort and give the families and friends left behind the strength to bear the loss. Alhaji Bolaji Fashola, the head of the family, said they were devastated by the news of the death of the octogenarian.

He told newsmen that members of the family were shattered by the death of the deceased. The family patriarch described the deceased as a kind man who would do everything to satisfy everybody. He said that he was with late Pa Fashola on Sunday and never knew he would be gone so soon.

“I was with him on Sunday. He was breathing heavily and he said he wanted to sleep and I left for home. I was shocked when I got the news today (Monday) that he had died. It is so sad. Everybody is shattered,” the patriarch said.

Also, Afenifere Renewal Group, ARG, in a statement signed by its Publicity Secretary, Kunle Famoriyo, said it received with shock the passing of Pa Ademola Fashola, saying “we commiserate with our Governor and all members of his family on the transition of their patriarch to the great land beyond. 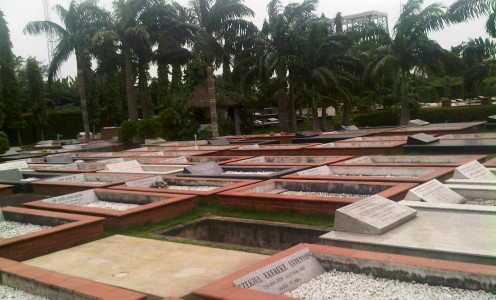 Ademola Fashola will be buried in tomb here

“Our solace lies in the comfort that the passing of our father in the Holy Month of Ramadan is a reassurance that he is resting in the bosom of Allah after a life well spent. Pa Fashola’s legacies are clearly evidenced by the leadership, diligence and disciplined character his son is exhibiting across all spheres of governance in Lagos State.”

ARG prayed that God would continue to abide with the Fashola family as “He gives them the strength and faith to bear this huge loss. May Pa Fashola’s soul rest in perfect peace.”

Reacting, Mr. Joe Igbokwe, spokesman of All Progressives Congress, APC, Lagos State, said Pa Fashola lived a life marked by simplicity and integrity, saying despite being the father of the Lagos State Governor, he was not known to have thrown his weight about to reflect that lofty position.

“He was a principled man who trained and brought up his children through the straight and narrow path. This strict disciplinary background is shown in the life of his son, Babatunde Raji Fashola, who has shown tremendous personal attributes that have helped set a record in hardwork, discipline and accountability in the governance of Lagos these past six years. I pray that the spirit of Pa Fashola find eternal rest in the bosom of the Lord,” he said.

The Vice Chairman, Senate Committee on Lands, Housing and Urban Development, Senator Gbenga Ashafa commiserated Governor Fashola over the demise of his father, describing the deceased as cool and calm with rare humility and high sense of discipline.

“We all are going to miss Alhaji Ibrahim Ademola Fashola for his fatherly advice at all times. If not for this untimely death, we would have celebrated his 80th birthday next month. Above all, God knows best. I pray that God Almighty gives the entire Fashola family the fortitude to bear the irreparable loss. May his gentle soul rest in perfect peace,” he said.

A member of the House of Representatives, Yakub Balogun described the death of Fashola’s father as sad and unfortunate, saying the deceased was a great man who spoke the truth at all times, with the fear of God as his watchword. He said Fashola’s father would be greatly missed by all, praying God to grant his soul eternal rest and the family, especially the governor the fortitude to bear the great loss.

Femi Gbajabiamila, a member of the House of Representatives, representing Surulere Federal Constituency area of Lagos at the House, said: “I heard the sad news. I knew the Governor’s father personally because he worked with my mother when she was the chairman of Surulere Local Government.

“He was a wonderful and unassuming man. He will be greatly missed. We, however, must thank God for the life he lived and the son he produced for us in Lagos. May his soul rest in perfect peace.”

Reacting to the death of the governor’s father, interim National Publicity Secretary of the All Progressive Congress, APC, Alhaji Lai Mohammed, described it as shocking, adding that the man passed on at a time his elderly advice was needed.

“It is a very sad loss. He left us at this time we need him most. He was an extremely humble man and never carried himself as the father of the governor,” he said, while praying that God should grant the departed eternal rest while condoling with the governor and other members of the bereaved family.

Chairman of the Lagos State House of Assembly Committee on Local Government Administration and Chieftaincy Affairs, Moshood Oshun, described the incident as unfortunate.

“Thank God he left beautiful children among whom is the governor of Lagos state. I condole with the bereaved family and sincerely pray that God should grant him aljana fiddaus,” Oshun, representing Mainland Constituency 2 at the House, said.

Chairman, Lagos Assembly Committee on Education, Science and Technology, Wahab Alawiye-King, said the incident was saddening, adding that “he was like a father to many of us and consistently advised us whenever we met him. In fact, he left at a time we wanted more of his elderly advice.”

The representative of Lagos Island Constituency II prayed that God should give the family the fortitude to bear the loss. Another lawmaker and representative of Apapa Constituency II at the Lagos State House of Assembly, Muyiwa Jimoh, said: “the man lived a fulfilled life, one as a journalist and secondly as the father of a performing governor. My encounter with him was in the holy land, he was a man loaded with ideas.”

Senate Minority Whip, Senator Ganiyu Olanrewaju Solomon while reacting to the death of the Governor’s father, commiserated with Fashola, urging the governor to take heart and thank God that his father lived a fulfilled life.

“We are all pained by this sudden death but we take delight in the fact that papa lived a fulfilled life of a good father to his children, a good husband to his wife and devoted servant of Allah,” he said while praying God to give the entire Fashola family the fortitude to bear the huge loss.

“No matter how old, it is always painful to lose one’s parent. I really feel for the Faholsa family on this particular incident,” he added.

The Chairman of Surulere Local Government, Tajudeen Ajide, also described the death as a blow to the governor and the state. Another member of the House of Representatives, James Faleke described the death “as devastating news, especially coming at this time. At this point of our political development, the advice and words of wisdom from Papa could have been invaluable for us. But we take solace that the Senior Fashola lived a fulfilled life.”

A former Senator, Muniru Muse said the news of the Octogenarian’s death was shocking, saying that “we need his advice and words of wisdom at this very crucial time, but who are we to blame God? He has His reason for taking Papa away.”