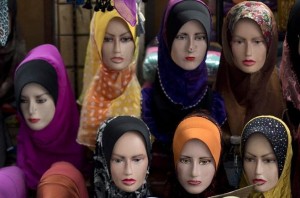 Scores of Swedish women from various faiths have posted pictures of themselves online wearing hijabs, or traditional Muslim headscarves, to show solidarity with a Muslim woman who was attacked in a Stockholm suburb for wearing one.

Police spokesman Ulf Hoffman says an unknown assailant attacked the pregnant woman in the suburb of Farsta on Friday. The victim was taken to hospital after the attacker tore off her hijab and hit her head against a car on Saturday.

Hoffman said the man shouted slurs which have led police to believe the attack was motivated by the woman’s religion.

Swedish television host Gina Dirawi and politician Veronica Palm are some of the notable figures who expressed solidarity with #hijabuppropet.

Green Party leader, Asa Romson, went as far as to change her Twitter profile picture, in support of the campaign.

“Risk of being beaten and discriminated against for how they choose to dress, everyday life for many women in Sweden 2013” Romson said on her twitter account.

Some men also supported the campaign posting photos in which they covered their heads.

Joel Almorth tweeted: “Yes wear veils today to show solidarity for all women, are put up with harassment and attacks!”

In an opinion piece published in the Swedish newspaper, Aftonbladet, on Sunday, the organisers of “hijabuppropet” urged Justice Minister Beatrice Ask to take measures to “ensure that Swedish Muslim women are guaranteed the right to personal safety and religious freedom, without being subject to verbal and physical attacks”.

“In addition, we demand that responsible politicians actively draw attention to and fight the structural discrimination that affects Muslim women.

“We believe that’s reason enough in a country where the number of reported hate crimes against Muslims is on the rise – and where women tie their headscarves extra tight so that it won’t get ripped off – for the prime minister and other politicians to take action to stop the march of fascism,” the authors wrote.

The “hijab outcry” campaigners urged the government to “ensure that Swedish Muslim women are guaranteed the right to … religious freedom”.

Police are now investigating the incident, according to a BBC report.

In response, Justice Minister Beatrice Ask said such attacks “must be taken very seriously”, according to the TT news agency.

The minister is expected to meet the campaigners on Tuesday.