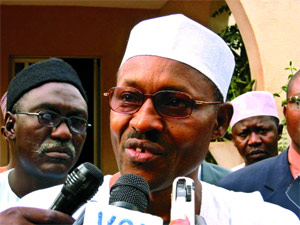 A former Head of State, Muhammadu Buhari, has urged members of the All Progressives Congress (APC) to remain united for them to achieve the set goals of the party.

Mr. Buhari made the call in Kaduna on Saturday in a message to a conference organised by the Movement for Better Future and Democratic Emancipation.

The APC leader, who was represented by retired Col. Hamidu Ali, said the only way to achieve success was for the party members to make sacrifice and allow a credible person to lead them.

According to him, APC is a party that is built on discipline, rule of law and accountability.

The former presidential candidate said the party would not tolerate any form of god-fatherism, adding that only credible candidates would be allowed to contest elections on its platform.

“Our party is not a party of god-fatherism. Only credible persons will be elected into any leadership position.’’

He pledged to support the movement, urging its members to continue the fight for the success of the APC.

The National Chairman of the APC, Bisi Akande, said the party was in the process of building its structure.

Mr. Akande, who was represented by a former Abuja Minister, Nasiru el-Rufai, said the party would elect credible executives at the local and state levels.

He cautioned members against any form of activity that would cause crisis in the party, adding that the party would not allow people to join the party for the purpose of obtaining leadership positions.

A former Governor of Kano State, Malam Ibrahim Shekarau, who spoke on the vision of the APC, said the party would ensure good governance in the country.

He said that the APC would aspire to ensure political and economic stability of the nation.

Mr. Shekarau advised leaders to adhere strictly with the rule of law, transparency and accountability as well as fear of God.

The Chairman of the Youth Leadership Foundation, Salihu Lukman, called on the APC leadership to ensure intensive mobilisation, to achieve its objectives.

Mr. Lukman said that the foundation would align with the APC leadership, to ensure victory for the APC in 2015.