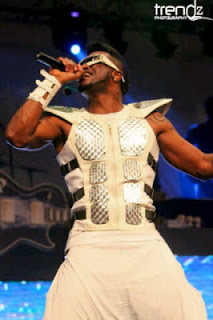 A couple of weeks ago, Peter Okoye of the infamous P-Square played a prank on bloggers when He released a supposed photo of himself in a strip club in Canada.

The photo went and the next day, Peter Okoye released the full photo showing the man in the strip club wasn’t him; Peter Okoye took his first shot against bloggers that day and started a war he will never win.

Now to the matter at hand, I reported yesterday that the Limpopo master – KCee joined the Oil and Gas business, in an effort congratulate his colleague KCee on Twitter, Peter Okoye fired a massived ‘Gbagaun’ as he wrote: “Personally welcome u on BORED”.

A fan instead of correcting him, called him an empty head and as expected, Peter Okoye immediately blocked him.