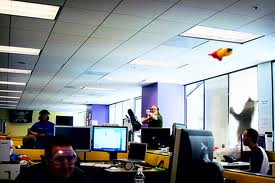 There are an endless amount of characters in the workplace.

There’s the lady you find in the break room, always on a diet and commenting on your weight (God help you if you are proportionate, she will eat you alive). The guy who shows off way too many baby pictures of his not-that-cute-kid. The girl who stays in her office with the door shut, even during fire drills. And the dreaded over-talker who never gets the hint (which might explain why that one girl stays in her office).

We all play roles in our workplaces, many of which are unique to only our office. But there’s a standard cast of characters as well. You can find varieties of them anywhere you go, but they all share the same skill sets. They are the ones who will succeed and the ones who will fail.

In lieu of filling you with fluffy “this is what a successful person looks like” talk, I thought I’d take the opposite route. The following is a list of people who stand out for all the wrong reasons. Fair warning: If you don’t know who this person is at your office, it might be you.

When a boss, HR rep or recruiter (or anyone playing a role in your career and financial success) states something that makes you tilt your head to the side and think “huh…that seems sketch,” don’t just accept it.

As I’ve said before, the car dealer will act like he can’t budge on a number. But if you stand up and start walking to the door he’ll automatically find a discount for you. Companies are in it for the bottom line even when they’re negotiating things with their employees. They want to encourage you to stick around while also finding a way to save money. And it saves them money to give you a smaller raise, to skip a round of promotions, to make you work through Christmas. Don’t fall for it.

Groupthink is a psychological problem that runs rampant in workplaces. Even more if you’ve got a large population of “longtermers” in a corporation. Groupthink is why technology isn’t updated, why policies are outdated, why there’s no new blood (or ideas) on a team, why you hear the sentence “you can’t do that, that’s not how we’ve always done it!”

It’s easy to spot these people, especially if you’re new to a company. They sit in clumps together and they make bizarre statements in meetings, they do the same things every day and they complain when their life is disrupted by something (or someone) new.

If you fight against a mass of groupthinkers, you run a high risk of failure, persecution, derailment and tons of frustration. But if you engage and join them, you will become silly and possibly unmarketable for your next career jump. Take your pick.

People do ridiculous things when they’re scared. Just ask anyone who’s died in a horror movie (I mean, who drops the phone and runs up the stairs?!).

Fearful people will cause you serious amounts of trouble at work. If they’re scared of getting fired, they will find a way to point a finger at you. If their project is failing, they will suggest your role was to blame. Drowning people will grab whatever they can to keep their head above water. Don’t stand too close and become that object.

And don’t become the drowning person. If you ever feel worried about something at work, you sense something bad coming your way or you screw up big time, avoid the fear by taking some action. Talk to someone, your boss, your mentor or a peer to get information that will quell your fears. Or fess up and find out immediately what repercussions are headed your way for the screw-up so you’re not worried about the unknowns. Do whatever you need to do in order to avoid becoming the fearful one.

The other day, a friend of mine posted a message on Facebook FB +3.3% stating her frustration that people keep calling her upcoming maternity leave a “vacation.” She mentioned a litany of things that have to be done while you’re on maternity leave (none of it sounded remotely vacation’ish). She referenced this because she felt judged and persecuted for her decision to take the time off.

Consider now the single person. If you haven’t been in this demo for awhile, you might not be aware of this, but single people are also victims of workplace apathy. I’ve actually heard the sentence, “You can stay late tonight to finish this, right? I gotta get out of here and it’s not like you’re going home to a family.”

Everyone is dealing with something. Everyone feels judged and misunderstood every once in awhile. And everyone feels the sting from these moments. Show some compassion even when you’re having trouble putting yourself in their shoes.

Don’t be the apathetic coworker. The grass isn’t always greener, even though it may appear so.

A sore loser will think you got that deal because you’ve got an important last name. Or that you were hired because your Mom sits in the corner office. Or that you simply got lucky (literally and figuratively).

You can’t stop a sore loser from thinking what they want and you can’t convince them out of their opinion. The only way to battle a sore loser is to make sure they’re not right (it might surprise some of you ladies that yes, business can indeed be conducted outside the bedroom!).

Update: It’s been called to my attention by several female readers that the comment above was offensive and diminishes the hard-earned success of females in the workplace. I realize now it was a poor example and misrepresented the very reason I have this column. It wasn’t my goal to suggest that women are perpetuating a Mad Men-era stereotype and that men are absolved of their roles in these scenarios. While it exists, this in fact is NOT a common problem in the workplace. I mentioned it as merely a side note to emphasize the importance in making sure “Sore Losers” are not making accurate accusations by carrying yourself properly in the workplace.

Use your connections and your network to get ahead, but do your own dang work. Show results. Then the sore losers will disappear one by one.

Assume that since they’re willing to share really bad information with you, they’re sharing it with other people. They’re kind of like the flu.

If you run across a malicious gossiper and they start talking, whatever you do, don’t agree with them. Because the next thing you know, your sentence of “Oh, I agree with you – I bet she totally slept with that guy to get that job” will be shortened to “So and so just told me that so and so slept with so and so!” And voila, you’re screwed.

I recently attended an event where several startups were invited to pitch. One woman stood up to sell her idea to a room undoubtedly full of millions, a big opportunity for a small company. She looked sharp and ready. But then she opened with, “Don’t worry, this isn’t a crappy website that does blah…”

Well shoot. For the remainder of her presentation, I assumed her website was crappy.

The Apologizer will discredit themselves as soon as they open their mouth. They will start a presentation with qualifying statements like the one above or they will ask for a raise by saying, “I know we don’t have a lot of money, but…” They lose these deals because they show a massive lack of confidence in the statement, regardless of topic.

You don’t necessarily have to avoid this person. Just don’t be this person. The company pays you a salary because they think you’re worth it. You have every right to be in the room and to be having that conversation right then. Why act like you don’t belong there?

Repeat the following statement as many times as you need to before you have an important conversation or make a presentation: Be confident, not cocky.