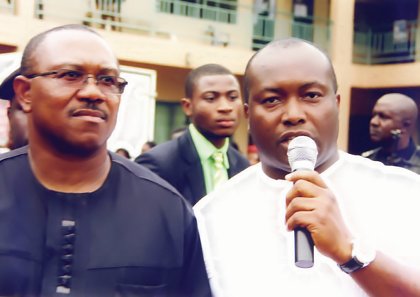 The campaign organization of Labour Party’s candidate for the November 16 governorship election in Anambra State, Ifeanyi Ubah, has warned Governor Peter Obi to desist from dragging the name of late Dim Chukwuemeka Odimegwu Ojukwu into the contest, saying that the late Igbo warlord would turn in his grave at the desecrations of the party which he helped founded – All Progressives Grand Alliance, APGA – by the outgoing governor.

The Ifeanyi Ubah Campaign Organization, which was reacting to claims that Chief Ubah during a radio audience participation programme evaded questions thrown at him by callers, accused Gov. Obi and the APGA candidate, Willie Obiano of resorting to misinformation to deceive the unsuspecting public.

A statement issued by Ayo Akinola on behalf of the Ifeanyi Ubah Election Campaign Committee said, “This election will be defined by issues not by empty boasts about achievements. It will not be won by the invocation of the revered name of Dim Chukwuemeka Odumegwu Ojukwu, who would be turning in his grave at the great rape carried out in the state by Peter Obi”.

Singling the governor spokesman, Val Obienyem of masterminding the alleged misinformation, the Ubah campaign organization said: “Val lied when he suggested that Ubah made it impossible for callers to ask him questions when he was featured on a live radio program. Ifeanyi Ubah has never shied away from being asked questions as Obienyem knows full well.

“He was available for questioning in Florida during the ASA-USA Conference and it is on record that he put up a stellar performance at a time when Willie Obiano had a terribly poor showing that he could not remember the name of his running mate. Ubah loves being taken on as he believes that a leader should be open to questions from his people.”