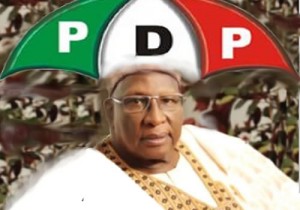 Chairman of the Peoples Democratic Party, PDP, Alhaji Bamanga Tukur has asserted that President Jonathan will remain in office after 2015, after re-contesting same year and finally end in 2019.

Tukur boasted that President Jonathan will in 2019 hand over to a younger member of PDP, stressing that the future of Nigeria belongs to the youths.

Speaking when members of the National Association of Nigerian Students, NANS, Anambra State branch paid him a visit at his Wuse residence, Tukur said that with the foundation already laid, it would then become very easy for Nigerian youths to spearhead the political and economic engineering of Nigeria, pleading with them to take the advantage right away rather than sit on the fence.

Tukur who noted that the PDP’s support for the youths was the reason it resolved to stand by its governorship candidate in Anambra, Tony Nwoye, notwithstanding the rumblings that have been characterizing preparations by the party for the governorship election in the south-east state, said that Nwoye has defined himself as a candidate who was not hankering after the governorship seat of Anambra in desperation.

According to him, it was rather the seat that needs him because of his potentials and the wealth of experience he had garnered in management of the youths affairs, even as he further urged the students from Anambra not to relent in supporting the party’s agenda in all areas, most especially its desire to position the youths for the challenges of taking part in rebuilding Nigeria.

Speaking earlier, the spokesman for the Anambra students, Mr Danielson Tony expressed misgivings on the crises within the PDP as he commended the Chairman for the wisdom, understanding and the maturity he had so far exercised in managing the crises.

He lamented that the uncertainty within the ruling party has been impacting negatively on its preparations for the Anambra state governorship election scheduled for November 16.

He however assured the PDP Chairman of the preparedness by the youths in Anambra to mobilise support for Tony Nwoye during the governorship election, based on conviction that he would eventually be cleared to carry the flag of the party in the election.