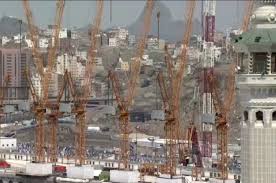 Hundreds of thousands of Muslims have poured into the holy city of Mecca for the annual Hajj pilgrimage as Saudi Arabia launches a multi-billion-dollar renovation project.

The pilgrimage starts on Sunday and ends on October 18. Monday marks the most important day, when everyone assembles at Mount Arafat, just outside Mecca, for the peak of the Hajj.

Just two days before the official start of the Hajj, around one million faithful performed Friday prayers at the Grand Mosque as the religious leader who officiated called for a peaceful and quiet Hajj.

People dressed in ihram, a two-piece seamless garment of white cloth, filled the area around the Grand Mosque, Islam’s holiest place of worship, which houses the cube-shaped Kaaba and is witnessing massive construction work.

The government’s goal with the renovation is to provide more space for the millions of faithful who make the pilgrimage. But many people think the new projects could jeopardise the holy city’s legacy.

The Hajj is one of the five pillars of Islam and is mandatory once in a lifetime for all Muslims provided they are physically fit and financially capable.

That is sharply down from last year’s 3.2 million, due to forced cuts as a result of expansion work and the scare from MERS, short for Middle East Respiratory Syndrome.

Abdullah al-Rabaia, Saudi health minister, was quoted in the local media on Thursday as saying that no MERS case has been discovered among pilgrims.

The kingdom has mobilised 95,000 members of the security forces, in addition to troops supporting the defence ministry, the national guard and intelligence, according to the interior minister. [AlJazeera]