THERE was panic at the official residence of the Chief of Staff, Government House, Port Harcourt, Chief Tony Okocha, on Thursday as a group of policemen invaded the place to effect the withdrawal of two policemen. 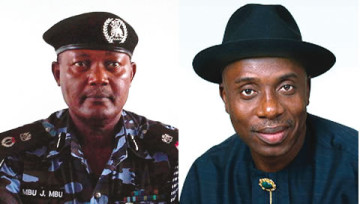 The policemen, who were about 15 in number, were said to have banged on the gate several times, a development that frightened those inside the premises.

According to sources, the policemen were acting on the orders of the Rivers State Police Commissioner, Mr. Mbu Joseph Mbu.

The policemen on guard were to have taken different positions when they heard the deafening bang on the gate, thinking that some unknown persons were trying to force their way in to cause havoc.

It was gathered that though nobody was harmed, the two policemen that were officially posted to Okocha’s residence later left the compound and reported to the State Police Command.

A Government House top official told The PUNCH that they (occupants of the residence) saw the written signal that instructed the group of policemen to withdraw two of their colleagues from the premises.

The same operation was said to have been carried out by another set of security operatives at the official residence of the Secretary to the State Government, Mr. Feyii George.

Press Secretary to the SSG, Mr. Chidi Adiele, told our correspondent in a telephone interview that he got information about the withdrawal of policemen posted to his principal’s house.

“Now, the SSG is left with only an orderly,” Adiele added.

Though no reason was given for the invasion of Okocha’s official residence, the latest development may not be unconnected to the lingering crisis in the state.

When contacted to speak on the invasion of the Chief of Staff residence by a group of policemen on the order of the CP, the State Police Public Relations Officer, Mr. Ahmad Mohamad told The PUNCH that nothing like that happened.

Mohammad described the claim as false baseless, saying, “It is not true. I am the spokesman of the command.  Such a thing did not happen. It (claim) is false and baseless.