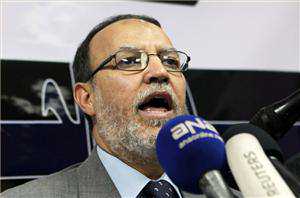 Essam el-Arian, the deputy leader of the Freedom and Justice Party, the political arm of the Muslim Brotherhood, has been taken into custody by Egyptian authorities.

El-Arian’s arrest comes as the latest arrest in a government crackdown against the Islamist movement, an Interior Ministry source said.

Arian, the deputy leader of the Freedom and Justice party, was taken into custody from a residence in New Cairo where he had been in hiding.

“Yes, he’s been arrested and details will soon be released,” the source told the Reuters news agency on Wednesday.

Local media circulated a photograph of what they described as the moment he was arrested, showing a smiling Arian standing next to a bed with two packed duffle bags.

Many Brotherhood leaders have been detained and charged with inciting violence since the army, prompted by mass protests, deposed president Mohamed Morsi on July 3.

At least 1,000 people, including security forces, died in the violence that followed Morsi’s removal.

An Egyptian court in September banned the Brotherhood group and seized their funds in an attempt to end the movement, which the government accuses of inciting violence and terrorism.