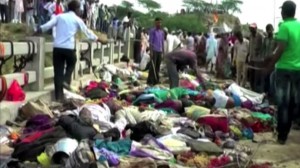 A stampede on a bridge outside a Hindu temple has killed over 80 people in India and dozens more may have died after they leapt into the water below, police said.

“More than 100 others have been injured” in the disaster in the Datia district of central Madhya Pradesh state, he added.

Arya said the stampede was triggered by rumours that it might collapse after being hit by a heavy vehicle.

“Many people are feared to have fallen into the river and are unaccounted for.”

Other police sources said that some 20,000 people were on the bridge over the River Sindh when the stampede broke out.

Up to 400,000 devotees were already inside or around the temple in Datia district, which is around 350 kilometres north of the state capital Bhopal.

NDTV, an Indian television network, cited sources at the scene as saying the situation was exacerbated by police charging at the crowds with heavy wooden sticks known as lathis.

However, Arya insisted “there was no baton-charge”.

Hindus are celebrating the end of the Navaratri festival, dedicated to the worship of the Hindu god Durga, which draws millions of worshippers to temples, especially in northern India.

India has a long history of deadly stampedes at religious festivals, with at 36 people trampled to death back in February as pilgrims headed home from the Kumbh Mela religious festival on the banks of the river Ganges.

Some 102 Hindu devotees were killed in a stampede in January 2011 in the state of Kerala while 224 pilgrims died in September 2008 as thousands of worshippers rushed to reach a 15th-century hill-top temple in Jodhpur.