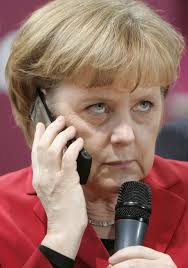 German Chancellor Angela Merkel has accused the United States of an unacceptable breach of trust after allegations that the US bugged her personal mobile phone, and she suggested data-sharing agreements with Washington may need revising.

Arriving for a two-day summit in Brussels on Thursday where the broad economic and social policy agenda has been overshadowed by allegations of eavesdropping by the US National Security Agency against Italy, France and Germany, Merkel said she had told President Barack Obama in a telephone conversation late on Wednesday that the acts were unacceptable.

“It’s not just about me but about every German citizen. We need to have trust in our allies and partners, and this trust must now be established once again,” she told reporters.

“I repeat that spying among friends is not at all acceptable against anyone, and that goes for every citizen in Germany.”

The stern words follow an announcement by the German government on Wednesday that it had seen evidence suggesting the chancellor’s mobile was “monitored” by the NSA.

The sharpness of the German complaint direct to an American president strongly suggested that Berlin had no doubt about the grounds for protest.

Merkel’s spokesman, Steffen Seibert voiced irritation that the Germans had waited for months for proper answers from Washington to Berlin on the NSA operations.

Merkel told Obama she expected the Americans “to supply information over the possible scale of such eavesdropping practices against Germany and reply to questions that the federal government asked months ago”, Seibert said.

Germany’s foreign minister has summoned the US ambassador to Berlin to discuss the issue, an event diplomats said had rarely happened in the past 60 years.

White House spokesman Jay Carney said Obama had assured Merkel in their telephone call that the United States “is not monitoring and will not monitor” her communications, leaving open the possibility that it had happened in the past.

Caitlin Hayden, the White House’s National Security Council spokeswoman, said: “The United States is not monitoring and will not monitor the communications of Chancellor Merkel. Beyond that, I’m not in a position to comment publicly on every specific alleged intelligence activity.”

Obama and Merkel, the White House said, “agreed to intensify further the co-operation between our intelligence services with the goal of protecting the security of both countries and of our partners, as well as protecting the privacy of our citizens.”

Following the unceasing flow of leaks by former US data analyst Edward Snowden, which revealed the reach of the NSA’s data-collection programmes, Washington finds itself at odds with a host of important allies, from Brazil to Saudi Arabia.

Germany’s frustration follows outrage in France after Le Monde newspaper reported the NSA had collected tens of thousands of French phone records between December 2012 and January 2013, and an Italian news magazine reported on Thursday that the NSA had monitored sensitive Italian telecommunications.

Merkel, who has previously discussed a “no spying” agreement with the United States, hinted that data-sharing deals with Washington may need to be relooked at, a potentially damaging blow for US efforts to collect counter-terrorism information.

“To this end, we need to ask what we need, which data security agreements we need, what transparency we need between the United States of America and Europe,” Merkel said.

“We are allies facing challenges together. But such an alliance can only be built on the basis of trust.”