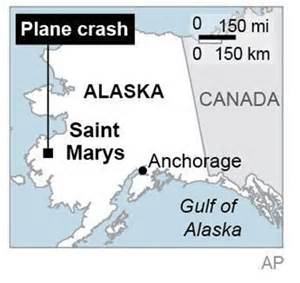 Four of the 10 people aboard a single-engine, turboprop Cessna 208, including a baby boy, have died when the plane crashed near the remote western Alaska village of Saint Marys, an Alaska State Troopers spokeswoman said.

The pilot and three passengers died in the Friday night crash, spokeswoman Megan Peters said on Saturday.
Peters had no immediate word on the six survivors’ condition.

The plane was a Hageland Aviation flight from Bethel to Mountain Village and Saint Marys, said Kathy Roser, a spokeswoman for Era Alaska airline.

The wreckage was found about six kilometres east of Saint Marys.

There was no immediate word on what might have caused the crash. The NTSB plans to send two investigators to the scene Saturday.

The temperature in the area Friday night was about minus eight degrees Celsius.