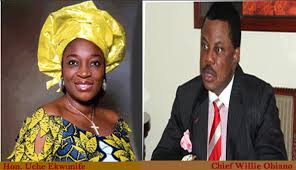 The first runner-up in the Anambra governorship primaries of the All Progressives Grand Alliance (APGA), Mrs. Uche Ekwunife, has dragged the winner of the primaries and flag-bearer of the party, Chief Willie Obiano, to court over his eligibility to stand for election.

Obiano was alleged to have registered in Lagos and Anambra states respectively, which amounts to double registration as stipulated by the electoral act.

Ekwunife, a member of the House of Representatives, is basing her argument on the alleged double registration status of Obiano with the Independent National Electoral Commission, INEC, as a voter, which she contends disqualified him from contesting the election.

In the suit filed at the Federal High Court, Awka, Anambra State capital, in suit number FHC/AWK/CS/281/2013, Ekwunife is also asking the court to declare her as the rightful candidate of APGA.

Obiano, APGA and INEC are joined as defendants in the suit. No date has been fixed for hearing in the suit.

Among other reliefs, Ekwunife is also seeking that INEC should be compelled to recognise her as the candidate of the party for the November 16 governorship election in Anambra State, based on Obiano’s double registration.