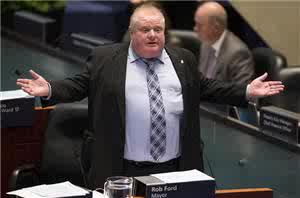 Disgraced mayor Rob Ford went down fighting as the city council stripped him of most of his remaining powers, calling him names as they did, and comparing his punishment to a military invasion and knocking over a councillor as he charged across the chamber.

In the latest chapter of an ugly, embarrassing saga in Canada’s biggest city and economic hub, Ford was reduced to largely a figurehead following the latest sanctions against him for his admissions of smoking crack and excessive alcohol use.

But Ford remained defiant and again refused to step down.

“You are absolutely telling everybody that voted in the last municipal election that their vote does not count,” he said.

Comparing the council’s decision to the Iraqi invasion of Kuwait in 1990, he added: “Well folks, if you think American-style politics is nasty, you guys have just attacked Kuwait.”

Leading up to the vote, debate on the motion descended into farce. Ford taunted hecklers in the public gallery, deriding them as “punks.” At one point he accidentally bowled over a female councillor as he charged across the chamber.

The civic leaders of Canada’s largest city had already voted last week to curb Ford’s official duties. On Monday they went further in order to “restore the confidence of the public in the government of Toronto,” according to the deputy mayor.

But Ford, who has apologised for his hell-raising lifestyle and for obscene public outbursts, refuses to quit, has spoken of taking court action and said the only judgment he should face is that of voters at the ballot box next year.

“This is going to be outright war,” said the mayor, who has faced a swell of outrage over a litany of misdeeds, both admitted and alleged, since police last month revealed they had video footage of him smoking crack.

Ford admitted he had smoked the illicit drug and apologised for his antics, including what he described as his many “drunken stupors.”

The city council overwhelmingly voted to cut the mayor’s budget and staff, bur a few others expressed concerns, saying it is “illegal and anti democratic,” “craziness” and de facto removing the mayor from office.

In its aftermath, the mayor now maintains a smaller office budget and a handful of aides, and keeps a seat on the city’s executive council.

He can also still attend official functions as Toronto’s mayor. But the deputy mayor assumes most of his other responsibilities.