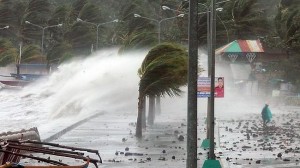 The death toll from Super Typhoon Haiyan has risen to an estimated 1200 people in the Philippines, raising fears in neighbouring Vietnam, which is now bracing itself for the storm’s next landfall.

Haiyan is one of the strongest storms to hit land in recorded history. The typhoon is headed toward Vietnam and is forecast to reach the country on Sunday morning with the Red Cross reporting that 6.5 million people could be affected.

A Red Cross official told CNN on Saturday that 1200 people had died in the Philippines in the devastation wrought by the storm.

Philippines Energy Secretary Jericho Petilla said he thought hundreds had died in the coastal town of Palo and surrounding villages that he visited on the devastated island of Leyte.

Palo and the neighbouring city of Tacloban were struck by devastating storm surges early on Friday as Haiyan began scything through major central islands.

The government earlier said more than a hundred people were believed to have been killed in the city of Tacloban.

Petilla, a Palo native, was dispatched by Philippines President Benigno Aquino to the island, and surveyed the damage aboard a helicopter.

“We saw 24 corpses in Palo, but officials there reported to us that there are people in nearby areas planning to bring their dead to the town centre,” he said.

Earlier Captain John Andrews, deputy director general of the Civil Aviation Authority of the Philippines, said more than 100 bodies were lying in the street in Tacloban.

Haiyan, one of the strongest storms ever recorded, slammed into the central Philippines yesterday morning forcing hundreds of thousands from their homes and knocking out power and communications in several provinces.

But the country appeared to avoid a major disaster because the rapidly moving typhoon blew away before wreaking more damage.

Typhoon Haiyan left the Philippines early today on a path toward Southeast Asia, the US National Oceanic and Atmospheric Administration tweeted.

Forecasters say the storm is expected to pick up renewed strength over the South China Sea on its way toward Vietnam.