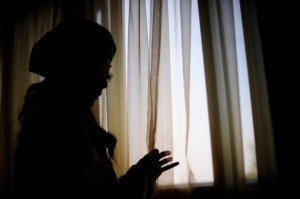 She grew up like most teenage girls in Britain – coveting the latest fashions, experimenting with make-up and hanging out with her mates after school.

Her Muslim parents, who ran a shop, were respected members of the community. Ayesha, whose name we have changed to protect her identity, was always encouraged to follow her dream of becoming a police officer.

But immediately she turned 18, she was taken on a family holiday to Pakistan – and her carefree life would never be the same again.

Days after arriving, she was forced by her father and two uncles into marrying a stranger.

Terrifyingly, it led to her being trapped in a marriage for four-and-a-half years, during which she was routinely raped.

When she dared to complain, she was threatened by her uncles. And when she tried to flee, they tracked her down and tried to kill her.

Ayesha eventually escaped, and today bravely tells her story to expose the growing problem of forced arranged marriages that is sweeping our towns and cities.

Each year 10,000 take place in the UK, and last month a shocking ITV documentary caught 12 Muslim clerics agreeing to marry off girls aged only 14.

Those youngsters who put up a fight often fall victim to honour-based violence, which can end in murder. even now Ayesha lives in hiding to protect herself.

As part of her campaign to raise awareness, she works with the police to help support other victims. Ayesha, now 36, says she enjoyed a “pretty normal school life”. She adds: “My parents were strict about not being allowed to mix with boys, go clubbing, have sleepovers or bare my legs. But apart from that I had a relaxed upbringing.”

She reveals how aged 17 she begged to be allowed to live in a flat-share while attending college.

“My parents finally gave in,” she says. “I went to the pub, had a drink and smoked, but didn’t go off the rails. Then things started to get weird.

“My uncle started turning up on my doorstep, saying I was bringing shame on our family. He said that if I ever left, he had a network of people and he would find me and kill me.

“I didn’t want to live the life of an Asian Muslim girl. I was British and I wanted to be just like everyone else… so I ran.”

But her family used a series of tricks to find her. “First they reported me to the police for theft,” she says.

“Police turned up and alerted my family to my location. When I moved again, my uncles used my national insurance number to find me. They would turn up on my doorstep with death threats and blackmail.”

After months of harassment, Ayesha was so scared she went home. “That’s when I realised I was in even more danger,” she says. “My uncle tried to strangle me. My parents stood silently and watched him hurt and threaten me.”

Months later, in 1996, came the holiday to Pakistan. She says: “Loads of family started turning up telling me I should marry this man I’d never met. I was terrified. I realised there was no way I was going home unless I agreed to marry.”

She tells how it took a year for her new husband to get his visa to join her in the UK. Meantime she travelled back and forth.

“Our married life was hideous,” she says. “I was raped for the whole four-and-a-half years. He beat me, controlled and manipulated me. I felt worthless.”

When Ayesha dared rebel against her husband, her parents chillingly warned her: “Apologise or get divorced and marry an old man. You’re damaged goods now and no one else will want you.”

It was the final straw and she even attempted suicide. Luckily she was talked out of it by a friend.

She fled and made the decision never to contact her family again. But within days they had tracked her down to a friend’s house.

She tells how in November 2000, her uncles tried to kill her by ramming her car off the road.

Police were called and her husband and uncles were arrested on charges of attempted murder.

The charges were later dropped as police believed the family’s story that they feared she had been kidnapped and were trying to save her.

Six months later Ayesha moved away, met a new partner and they set up home together. But she says: “I slept with a knife under my pillow.”

But they have no idea where she lives, and she says her new partner wants nothing to do with them. Through it all, though, the family bonds are still strong – so much so that Ayesha is now even considering donating a kidney to her father, who is on the transplant list.

She says: “My partner doesn’t understand how I can even think about helping my dad after all that happened but I have had to forgive to stop the nightmares.”

As well as assisting the police, Ayesha is now also working with Karma Nirvana, a charity which helps victims like herself.

“When I made the call to them, I felt the weight of the world come off my shoulders,” she explains.