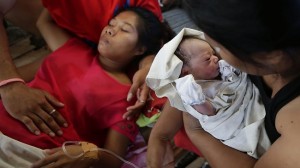 A national state of calamity has been declared in the Phillipines as the country reels from the destruction of Typhoon Haiyan, with an expected death toll expected to reach tens of thousands.

The president, Benigno Aquino, on Monday declared emergency measures to get aid to the many millions of people left destitute by the superstorm, and promised them that “help will reach you faster and faster”.

“My appeal to you all is: remaining calm, praying, co-operating with, and assisting one another are the things that will help us to rise from this calamity,” he said in a televised address.

An international relief effort began in earnest on Monday, with a host of countries and organisations including the US, the EU, New Zealand and Australia pledging relief to the Philippines.

The worst hit area, Tacloban, was all but flattened by the typhoon’s 300km an hour winds and storm surge, with only some concrete buildings left standing. It is here that officials believed up to 10,000 have died.

Philippine soldiers were distributing food and water in Tacloban, and assessment teams from the UN and other international agencies were seen for the first time. The US military dispatched food, water, generators and a contingent of marines to the city, the first outside help in what will swell into a major international relief mission.

“I don’t believe there is a single structure that is not destroyed or severely damaged in some way – every single building, every single house,” said US Marine Brigadier General Paul Kennedy after taking a helicopter flight over the city.

Amid the disaster, 21-year-old Emily Sagalis cried tears of joy after giving birth to a “miracle” girl in a typhoon-ravaged Philippine city. She named the baby after her mother who went missing in the storm.

The girl was born Monday in a destroyed airport compound that was turned into a makeshift medical centre, with her bed a piece of dirty plywood resting amid dirt, broken glass, twisted metal, nails and other debris.

“She is so beautiful. I will name her Bea Joy in honour of my mother, Beatriz,” Mrs Sagalis whispered shortly after giving birth.

Mrs Sagalis said her mother was swept away when giant waves generated by Super Typhoon Haiyan surged into their home near Tacloban city, the capital of Leyte province which was one of the worst-hit areas, and she has not been seen since.

“She is my miracle. I had thought I would die with her still inside me when high waves came and took us all away,” she said, as her teary-eyed husband, Jobert, clasped the baby and a volunteer held an IV drip above them.

The husband said the first wave that came carried their wooden home in the coastal town of San Jose many metres inland, washing all of the family outside.

He said the entire community had been washed away, with the once picturesque area replaced by rubble and the bloated remains of people and animals.

“We are supposed to be celebrating today, but we are also mourning our dead,” Jobert said.

He said it was God’s will that he found his wife floating amongst the debris.

Authorities have said at least 9.7 million people in 41 provinces were affected by the typhoon.