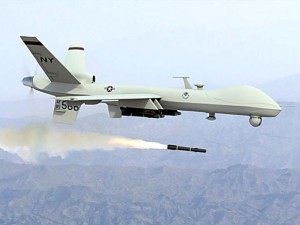 Intelligence officials in Pakistan say a suspected US drone strike has killed at least three people in North Waziristan.

Two intelligence officials said two missiles hit a house on Friday in the village of Dande Darpa Khel near the main town of Miran Shah.

The officials said the village is the stronghold of the Haqqani militant network, believed to have been the target of the drone.

The officials spoke on condition of anonymity as they weren’t authorised to speak to journalists.

The missile strike is the second after Pakistani Prime Minister Nawaz Sharif’s visit to the US last month where he pressed for an end to the drone strikes.