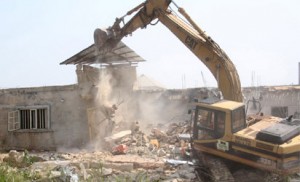 Abia State government has demolished an uncompleted building being used as baby sales point at Umuobia Olokoro in Umuahia South Local Government Area of the state, less than a week after a five-storey building used as a baby factory home in Aba.

Speaking during the demolition exercise, Special Adviser to the Governor on Security and Task Force Matters, Captain Awa Udonsi Agwu (rtd), explained that the state government had zero tolerance for crime.

According Udonsi, the police fingered one Mr. Uche Uhuabunwa and his wife in the illegal business.

According to him, 18 pregnant young girls were rescued by the police during a raid in the place.

He therefore called on the people of Abia State to give adequate information to the government on all types of crime in the state and commended .