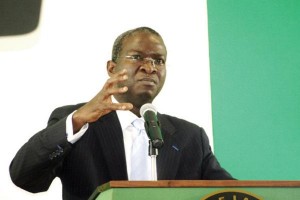 Governor Babatunde Fashola (SAN) of Lagos State on Boxing Day declared Nigeria a dysfunctional state, citing the diverse challenges confronting the country which he said have impeded her path to greatness.

Fashola also lamented the country’s drastic fall from her glorious position in the comity of nations, which he noted was once coveted and respected by several countries in Africa as well as the world at large.

Expressing his concerns about the declining status of Nigeria in the international community in a press release by his Special Adviser on Media, Mr. Hakeem Bello, taken from the governor’s annual lecture delivered on Christmas eve at the Yoruba Tennis Club, Lagos Island, Fashola decried the growing scale of pretense that all “is well with Nigeria”.

He said the questions “represent a moderation of the current realities that Nigeria has become dysfunctional as a nation because not only has her ego been bruised and her national pride brittle where it even exists.

“Many nations who either once looked to her for assistance or leadership will rather now seek not to be openly associated with Nigeria. As if that was not bad enough, those who dared not look us in the face at one time are no longer restrained in making scurrilous statements about us.

He, however, said putting Nigeria together again would not happen simply by saying so, which he pointed out was indeed “a starting point and a good one that indicates the people’s resolve [but] it will also require everyone to unite their minds so that action can also be united.

He added that leaders at all levels “must accept and not pretend about our currents status, that we have tripped and fallen. We must resolve, because we believe that we will get up and climb our way back to the top.

“Let me remind those who are old enough to remember, and they seem quite many here tonight, and inform those who are too young to know, for it is they who have the largest stake in this future, that our period of greatness was not free of trouble. There was a crime.

“There were labour strikes, there were political struggles; there was disease; and in the midst of our prosperity, there was still a cash crunch, but amidst all of these there was the elixir of hope and a promise of a better life on the horizon”, he explained.

Fashola noted that the only difference between Nigeria of yesterday and her today, is that yesterday’s hope has given way to today’s uncertainty and despair and the only reason seems to be the choices that have been made and by the values pursued.

He explained that it is the citizenry that has changed and not the country, its resources or its promise because while her population “has become bigger, her productivity has certainly diminished. This has happened because the population of today was not of the same quality as the population of yesterday.

“We must accept that we are the problem and not any government or any constitution. We must resolve… to say no to all of those things and to do so for one purpose – because we believe again. What are those things we must do less of? They are a long list that seem to vary daily, but which some of us undertake, and for which all of us pay”, he said.