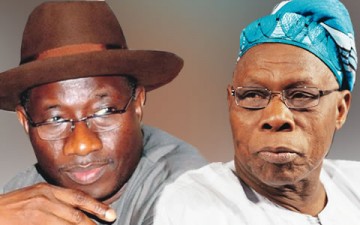 Indications have emerged that some former Heads of Government have initiated moves to mend the broken relationship between President Goodluck Jonathan and former President Olusegun Obasanjo.

The peace moves it was learnt follows the recent recourse to use of open letters to discuss otherwise private and highly sensitive matters of state which if not handled properly could snowball into a major political crisis.

This is just as security agencies are planning on how best to approach the former president to shed more light on some of the allegations in his letter, especially those that have the potential to breach security.

Some of the leaders reportedly on the peace train are ex-Head of State, Gen. Yakubu Gowon (rtd); ex-President Shehu Shagari, former Head of Interim National Government, Chief Ernest Shonekan and eminent leaders drawn from the six geo-political zones of the country.

It was learnt that some of the leaders had reached out to Messrs Jonathan and Obasanjo, urging them to sheathe their swords.

According to a source, who is aware of the peace initiative, “These leaders are concerned that the feud might threaten the National Council of State”, adding that “imagine if a meeting is called and members of the NCS pitch tents with either the president or Obasanjo”.

On the willingness of the former president to agree to a reconciliation process brokered by the respected leaders, the source said: “I know Baba is still angry but he is watching the unfolding development. We hope the leaders will be able to facilitate the reconciliation”.

Meanwhile, a security source, who spoke on the condition of anonymity because he is not authorized to speak to the press on the matter, said the peace moves notwithstanding, the security agencies would still go ahead with a probe of the allegation in Obasanjo’s letter that snipers are being trained because it has “grave implications for our national security”.

The source added: “Our probe is not to apportion blame but it will enable us to put pre-emptive measures in place, depending on our findings”.

When pressed to comment on whether the security agencies would invite Obasanjo, the source explained that “We will interact with the ex-president in a manner dignifying of his status.

“As a Nigerian, he has raised a concernand we have a responsibility to invite or visit him for interaction.

“If the allegation is true, we will pass our findings and recommendations to the government as appropriate.

“Where the allegation borders on intent or it is outright falsehood, we will also make our findings known to the government and the ex-president. No one is on trial in this circumstance; this is our approach to it”, the source stressed.